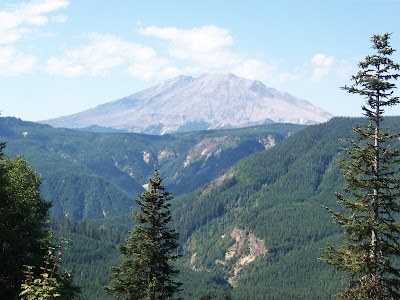 ..We took Forest Service Road 25 south of Randle down to FSR 90 to get to Ape Cave. Along the way we got glimpses of Mt. St. Helens since Ape Cave is a part of Mount St. Helens National Volcanic Monument. 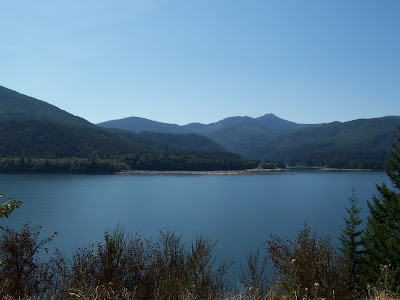 ..FSR 90 runs along the Lewis River where it is dammed three times. The first dammed lake is called Swift Reservoir. 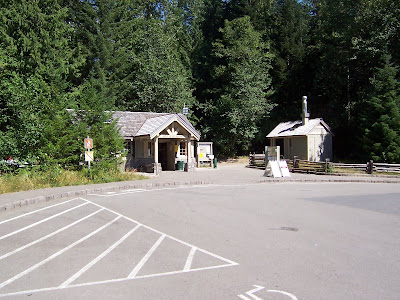 This is the Ape Cave Visitor Center where we picked up a brochure for the area. The following information was taken from this brochure. Ape Cave was discovered in 1947 by a logger named Lawrence Johnson. However, the cave was not explored until the early 1950's when a scout troop, lead by Harry Reese, lowered a team of scouts down a 17' foot overhang to the cave floor. Leaving footprints where no one ever had, these explorers were able to travel throught a pristine lava tube full of fragile formations. Ape Cave was named by the Scout Troop in honor of their sponsor, the St. Helens Apes. This local group was made up primarily of foresters. The sponsor's name, St. Helens Apes, may have come from an old term used for foresters in the area, "brush apes," or from the legend of Bigfoot. 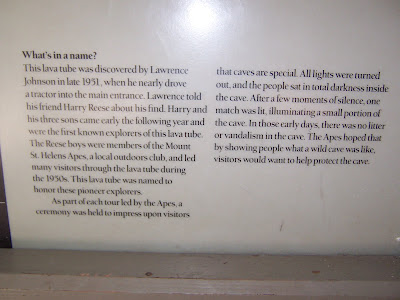 ..The formation of Ape Cave marks an unusual period in Mount St. Helens' eruptive history in that it is the only known basaltic eruption of the volcano. Eruptions of fluid basaltic lava, much like those in Hawaii, are rare occurrances in the Cascade Mountain Range. The Cascades usually erupt lava of a thicker consistancy. When this type of magma is coupled with suspended gases, explosive eruptions tend to occur. The eruption of Mount St. Helens on May 18, 1980, exemplifies this tendency. 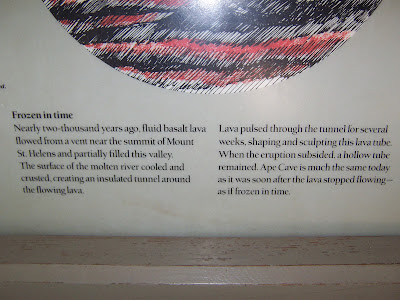 About 2,000 years ago, fluid basaltic lava poured down the southern flank of the volcano. As the lava flowed, chunks of the lava's surface cooled, crashed and fused together creating a hardened crust. In turn, the crust insulated the molten lava beneath, allowing it to remain fluid and travel down to the Lewis River Valley.
The hot flowing lava began melting into the pre-existing rock and soil. This thermal erosion deepened and widened the channel of the flow. The level of lava in the tube rose and fell as the eruption surged and slowed, contributing to the unique contours of the walls. 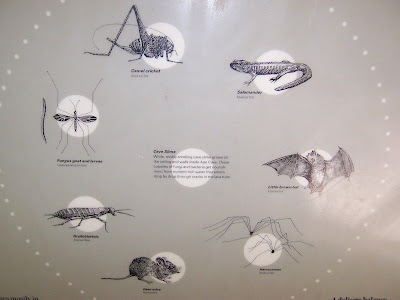 During this eruptive period, hot fluid lava pulsed through the tube for months, possibly up to a year, until the eruption subsided. As a result of this rare eruption, a spectacular 13,042 foot long lava tube, the third longest in North America, was created.

Althought we didn't see any of them, here are some common critters found in the lava tube. 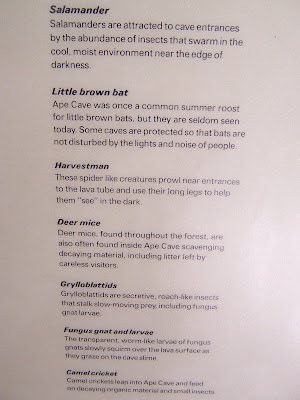 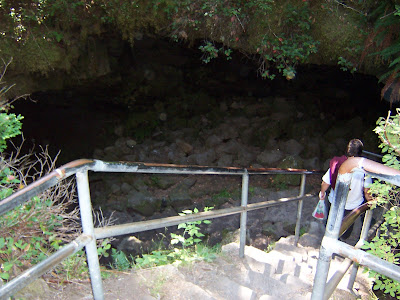 Since we only had one good flashlight, we rented a lantern from the visitor center and decended into the cave. There are two routes: Lower Cave and Upper Cave. Upper Cave requires you to climb over rock piles and squeeze through holes.... Nope we took the Lower Cave route. 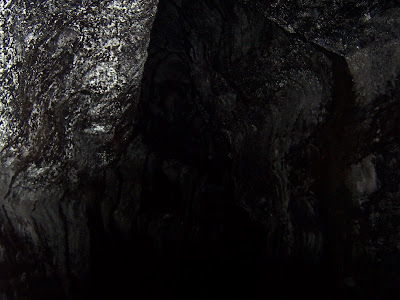 Dang it was dark down there so picture taking was difficult. 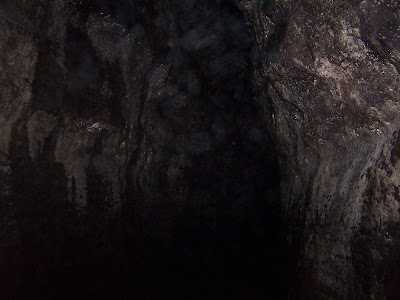 Sometimes we could hardly see the ceiling, other times it was not far over our heads. 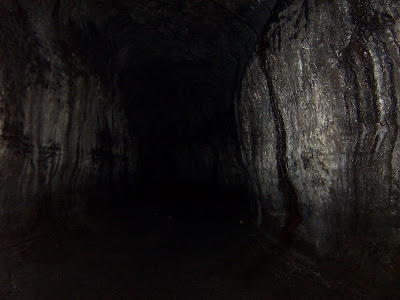 ...At one point we could feel a breeze hitting our backs but then it disappeared. We didn't see any hole for the wind to exit but it had to be there or there wouldn't have been a wind. 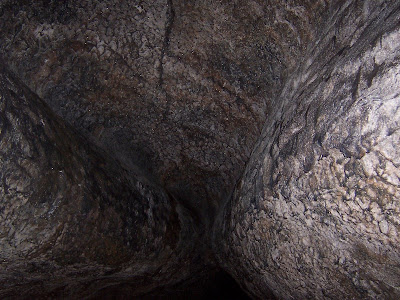 This is looking up toward the ceiling. Notice how the walls bulge out here. 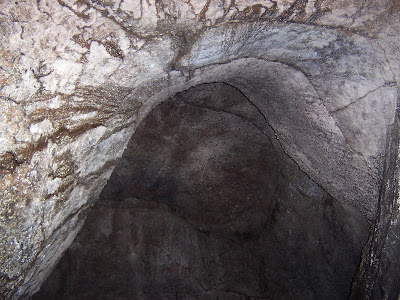 This is looking straight up in another area. 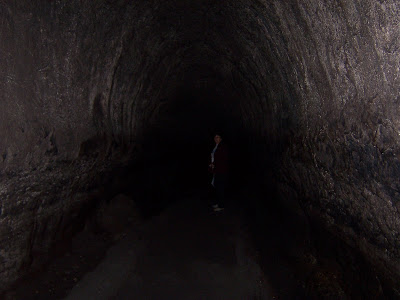 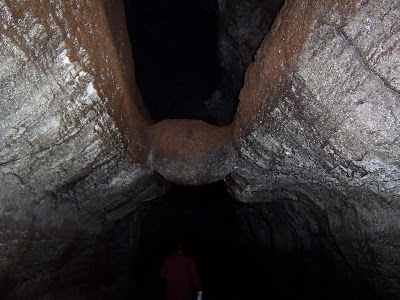 This is "The Meatball". It is a block of cooled lava which fell from the lava tube ceiling while lava was still flowing through the cave. It floated on the surface of the lava flow and was ferried downstream until it became wedged in a narrow spot 12 feet above the present cave floor. 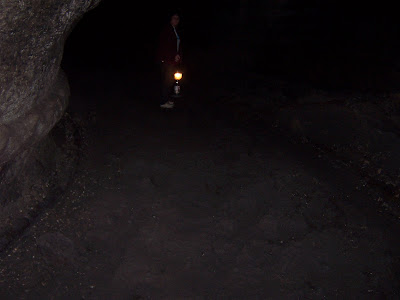 ..It's hard to see but the floor is quite bumpy and uneven here. The floor was fairly smooth in some places but we also had to descend some rocks and climb them on the way back out of the tube. 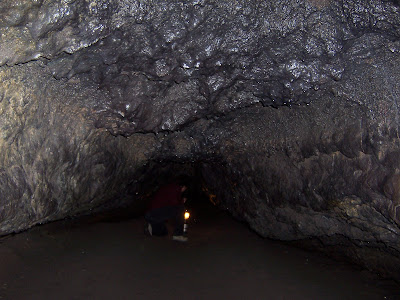 Dead end. This is where the lower tube ends so we went back the way we came in. I got down on one knee but I wasn't willing to go crawling back any further.