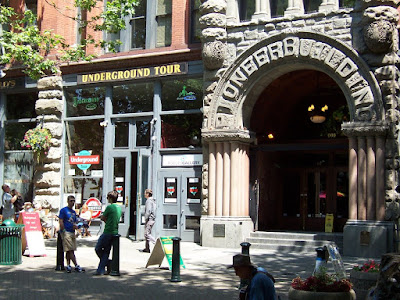 Bill Speidel's Underground Tour was our next stop. It is in the Historic Pioneer Square area and has a lot of Victorian buildings. Notice the Pioneer building arch. 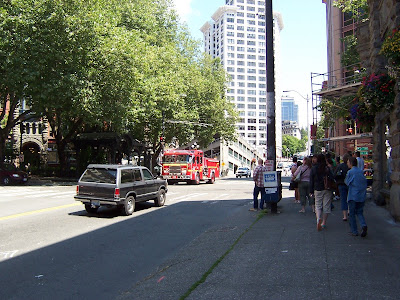 Bill Spiedel helped save the historic buildings when they were about to be razed to make room for more modern buildings. Right behind the fire truck is the "sinking ship" parking garage. An historic hotel stood on this spot before it was razed and, with that, people started to get concerned about the other historic buildings in the area. 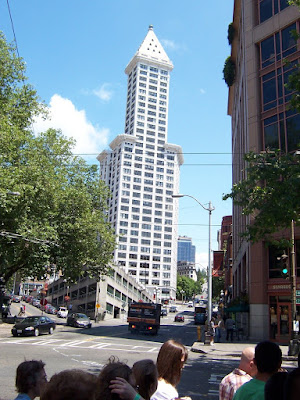 Another photo that shows the "sinking ship" parking garage. That might be Smith T0wer behind it. 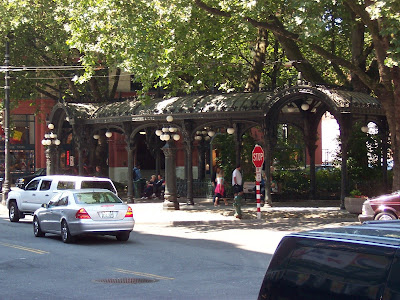 This covered walkway is called the Pergola and was constructed for the 1909 World Fair. 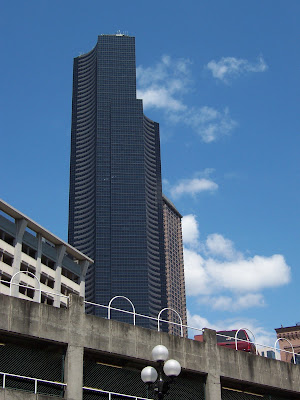 The top of the parking garage and maybe Columbia Center. No one was pointing out the buildings and telling us the names so I'm guessing. 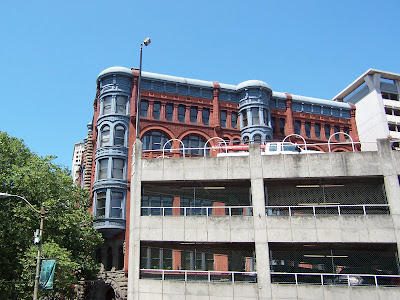 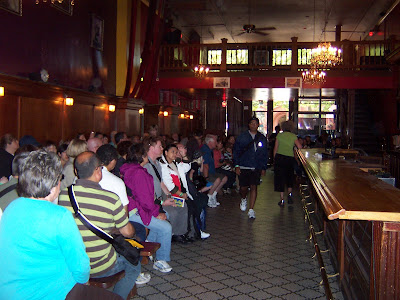 Seattle had a fire in 1889 that destroyed 25 square blocks of the town. Now, at that time, Seattle was build on tide flats and, even though they used flush toilets, there wasn't an adequate sewer system. After the fire the city council wanted to move dirt from the upper hills to fill in the lower area and improve the sewer system but it was going to take 10 years and the merchants weren't willing to wait quite that long. 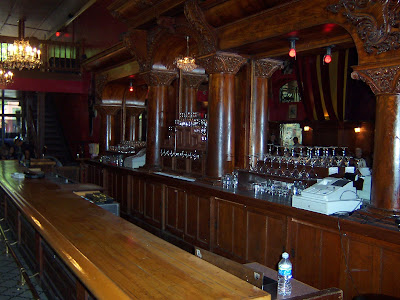 Many people gathered in this old bar for the tour we took. The guides spent about 45 minutes giving us a short history of Seattle and the tour. The merchants rebuilt before the land was raised but the city then raised the streets and the lower floors of all the buildings became basements. That's why there's an underground. 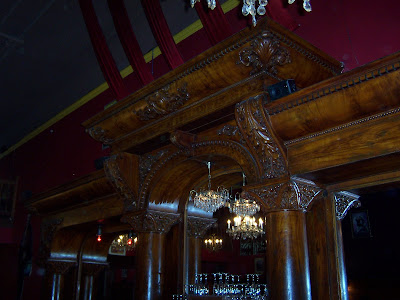 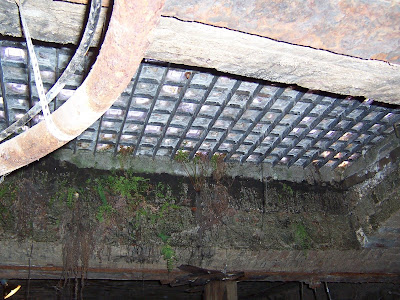 Once underground, we looked up through skylights that were placed in the sidewalks.. 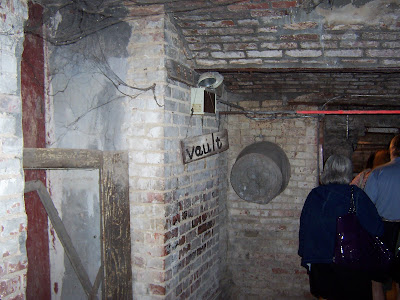 Basement of a bank where there was a vault. Noticed the arched brick ceiling. These supported the sidewalks. 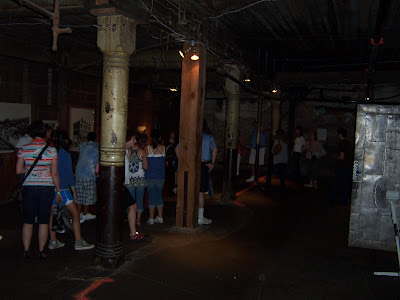 This room was once a general store. 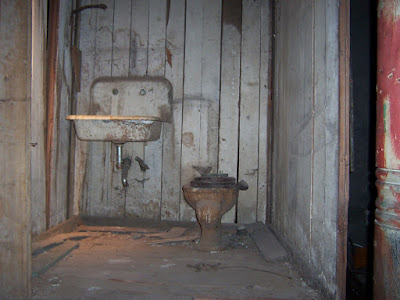 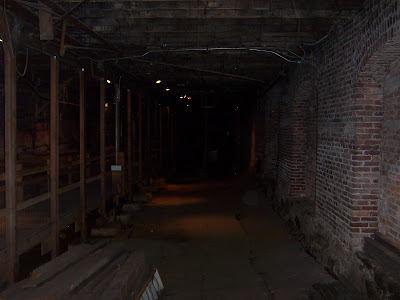 To the right you can see the front of a building. 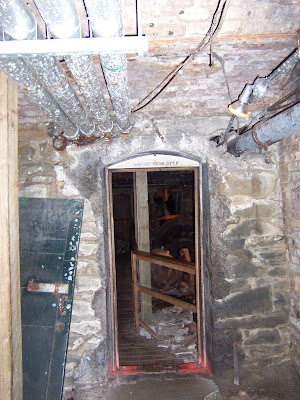 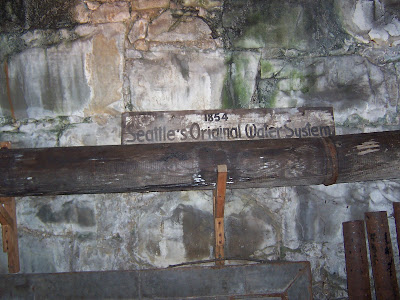 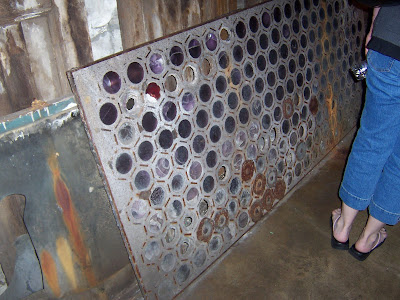 One of the grates stored in the underground. 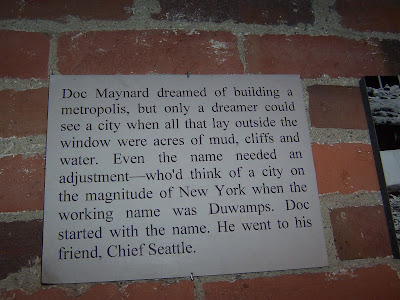 After the tour we ended up in the museum where we read about Seattle's history. 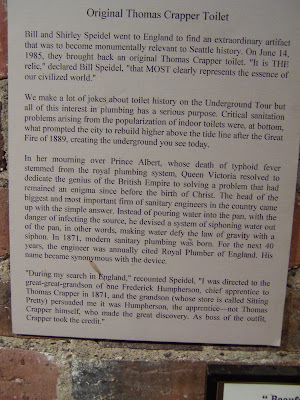 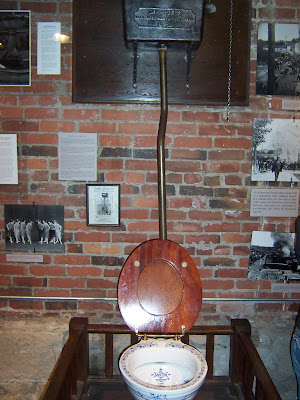 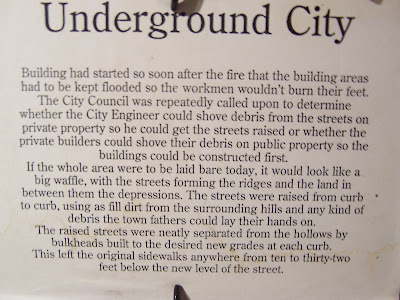