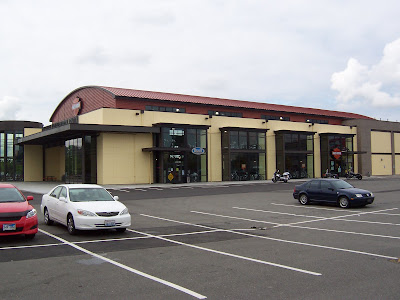 Time for a trip to Seattle to see some of the sights but on the way we stopped at Downtown Harley-Davidson to meet a Women on Wheels® member. This dealership looks pretty new. 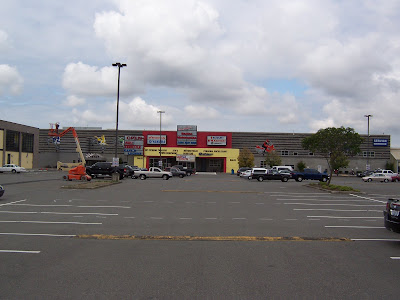 Right next to it is this dealership that sold a lot of brands. I'm sure it's the same owners and Harley forced them to build a different building. They do that. 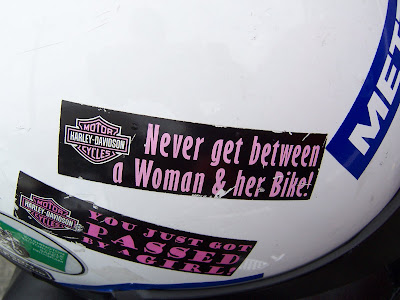 Some of the helmet stickers the WOW gal had on her helmet. 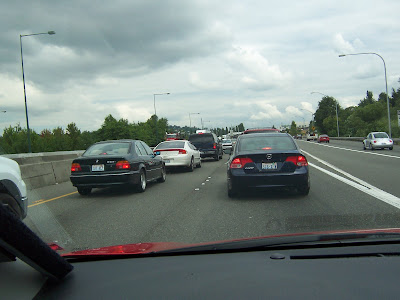 Although it was 11:45 a.m, the roads were parking lots in places. 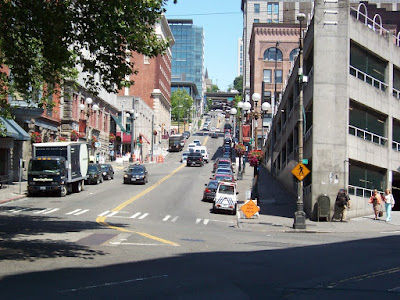 WOW, I didn't know Seattle was built on hills and the trip down this road was interesting to say the least. I was glad we weren't on our bikes. We were told it's only an 18% grade but that must be overall and not on the street between the intersections. 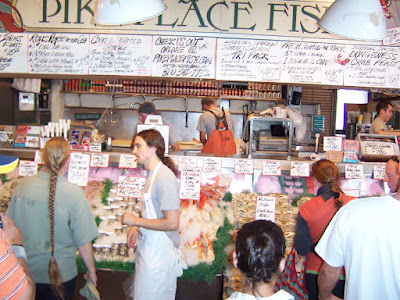 After finding a parking garage for the car, we took a walk to Pike Place Market. There were several shops that were selling fish. 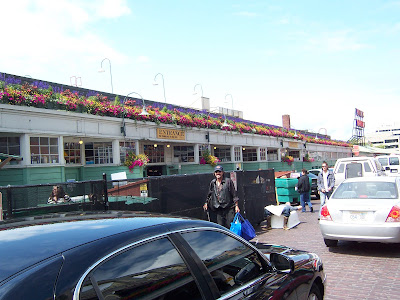 Then we wandered down Pike Place and I noticed the beautiful flowers on the tops of the buildings. Very nice. 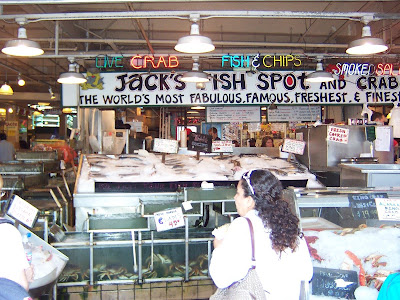 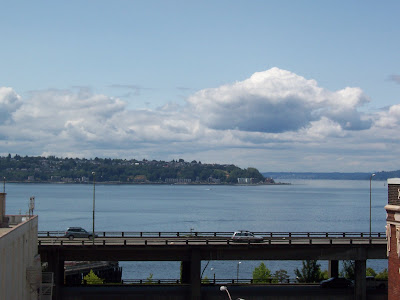 During the walk back to Pioneer Square, we saw a break in the buildings where we could look out over Puget Sound. 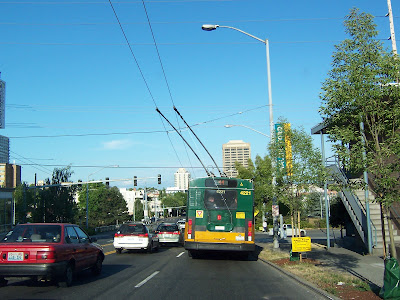 Although we did some more sight seeing, I'm leaving those photos for other posts. Here's what we saw when we left town. I finally got a good photo of one of the electric buses. Most of the streets have the electric lines over them so I suppose most of the buses are electric. 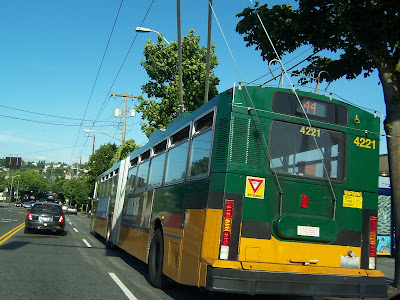 This one was one of those "accordian" buses. You know, the ones that bend in the middle. 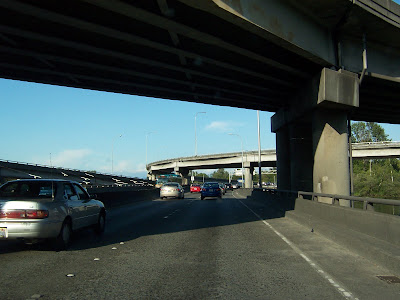 We started south on I-5 but then headed off on Hwy 502 where we saw this interesting intersection. 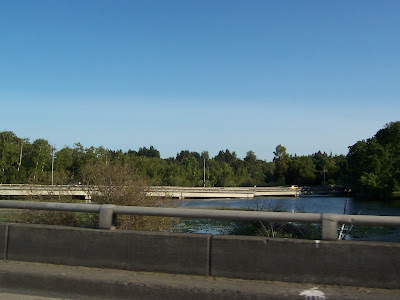 Doesn't it look like one span of the bridge just ends over the water? 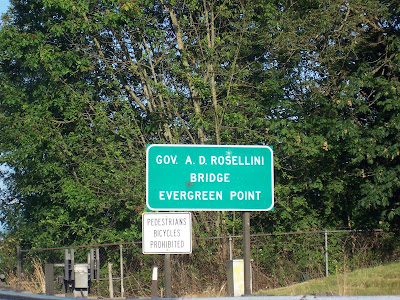 This is why we took Hwy 502. We wanted to go over the longest floating bridge in the World! 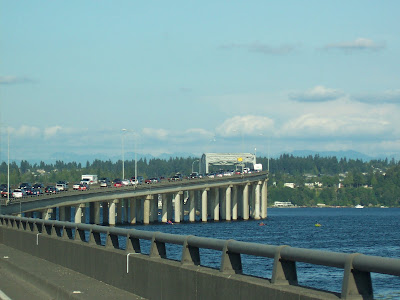 Before we got to the floating section, we had to go up and over the bridge where boats can cross under. Interesting how it curves. 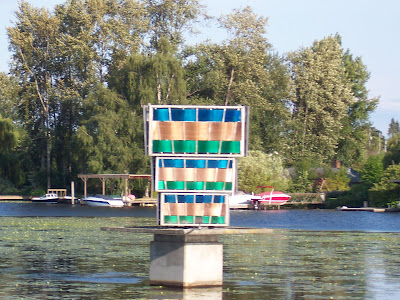 Saw this "art" along the road. 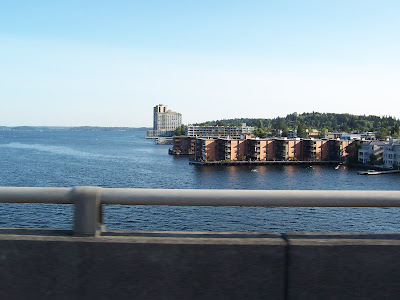 And these condos on the water. 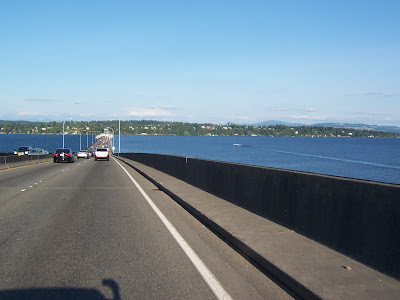 Ok, down to the floating section we go. ... Really didn't notice any difference but at least we can say we were on it. 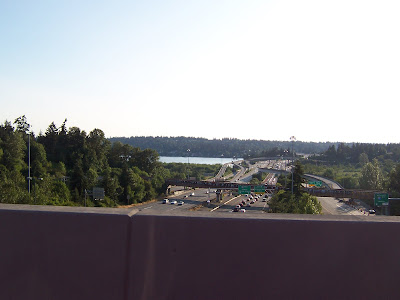 Then we headed south on I-405 and went over this snaggled intersection with I-90. The I-90 floating bridge into Seattle is being repaired so it was down to two lanes. 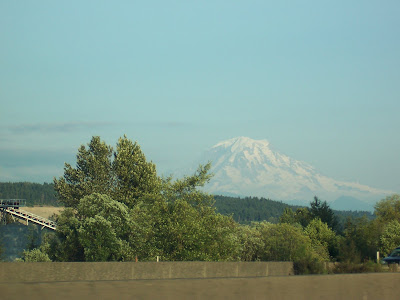 We had lots of fabulous views of Mt. Rainier but it really doesn't photograph well....at least by me.