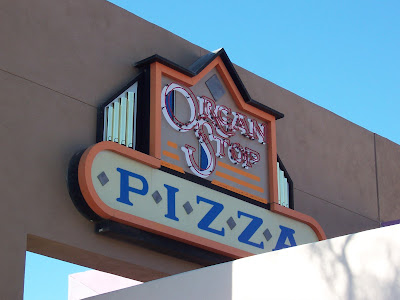 January 11th we went with a group of over 100 from the park to Organ Stop Pizza. Now the pizza is ok but the real draw is the organ. It's a 1927 Wurlitzer theater pipe organ that was made to provided the music for silent films. It's the only one still left that is played on a continuous basis in a commercial establishment. It is insured for 4 million dollars but most if its parts are irreplacable. 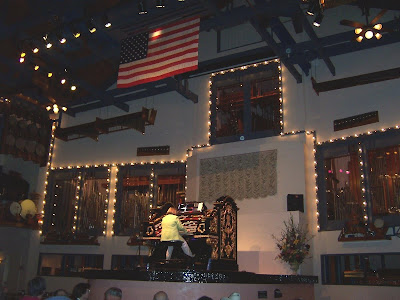 The main attraction. Now look to the left.. you can just make out the drums on the wall. Above them are some other percussion instruments. Under the U.S. flag are some instruments mounted on the wall. Under those you can look through the windows to see some of the 5,000 pipes that are used to make the wide variety of music the organ can play. Behind the flag are more pipes. To the left are more windows behind which play more pipes. The windows are actually louvers that open and close to control the volume of the sound because the pipes only play one volume. The organist controls it all. 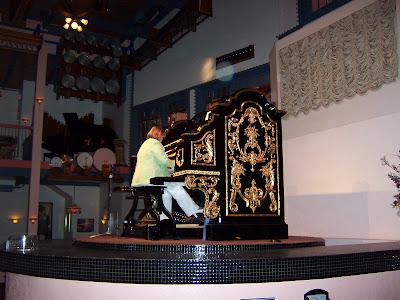 Here's a better view of the instruments to the left of the organ. The organ even controls the grand piano behind the drums. There's a fake duck on a barrel back there and there's a key on the organ that makes it quack. The organ has pull out trays covered with buttons that play special sounds from fog horns to 1920's oogah auto horns. 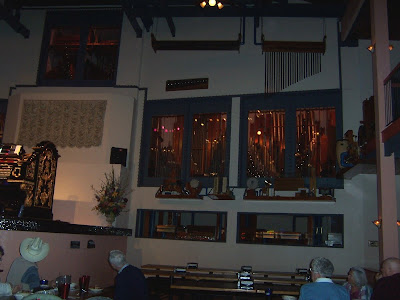 This is a better photo of the instruments on the right of the organ. There are carnival whistles, a tamborine, bells and way too many other things. The pipes can be played to sound like bag pipes too. Oh, the trumpet section is to the back of the theater above the crowd. And there's more instruments on the ceiling. There's even a bubble machine on the ceiling and the organist played "Under the Sea" from Disney's Little Mermaid and bubbles came out right over a four year old. Needless to say, she was delighted.
Posted by Nolan and JoAnn at 8:29 PM