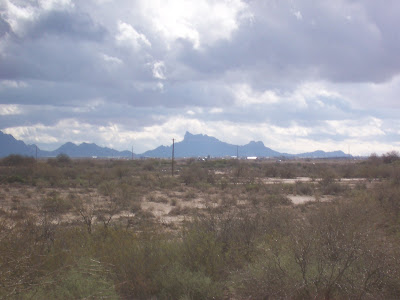 Picacho Peak as see from the top of our trailer. Yes, I had to zoom in on it. To the left of the photo is the rest of the Picacho Mountain Range. 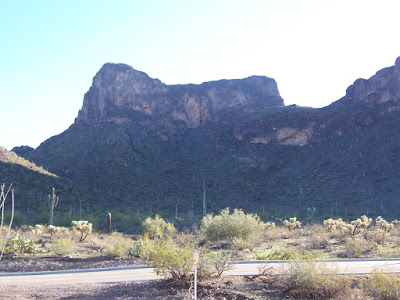 For the last day of January 2010, Nolan decided we should hike to the top of Picacho Peak. It's right along I-10 south of Casa Grande and we've passed by it dozens of time. The peak and the land around it is a state park. The mountain has been used as landmark for travelers for centuries. 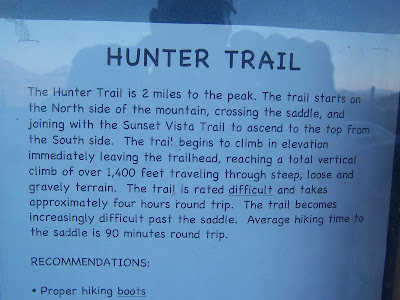 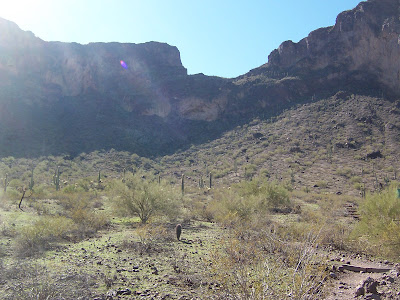 The trail did indeed start rising immediately. The first goal was to get to the dip in the mountain just ahead. But it wasn't a straight path. We weaved back and forth all the way up the hill. I was pooped by the time we got to the saddle. 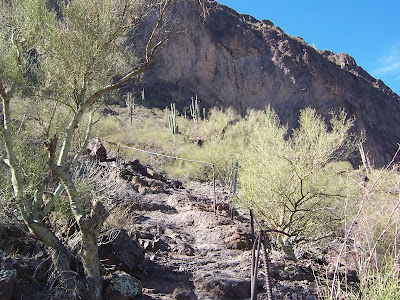 This is the first of many cabled areas where we used the cable to help us up the trail. 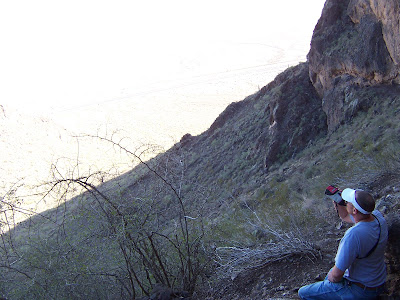 ......I don't know how many breaks we took on the way to the saddle but we enjoyed the view along the way. Since we were in the shadow and the view was in the sun, this photo doesn't show the view. 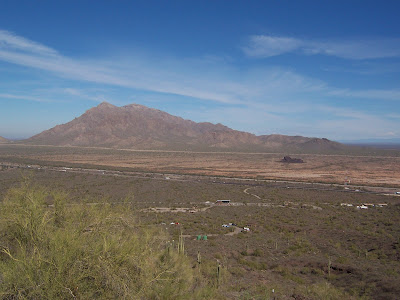 ...So here are a few photos from this stop. Across the way is the rest of the Picacho Mountains. They were all formed by a volcano 22 million years ago. Scientists have never determined where the volcano was located. 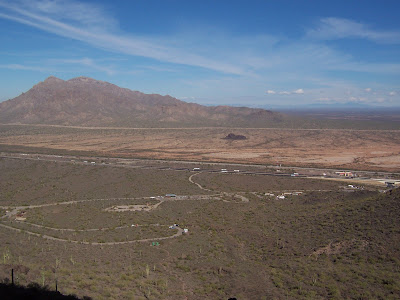 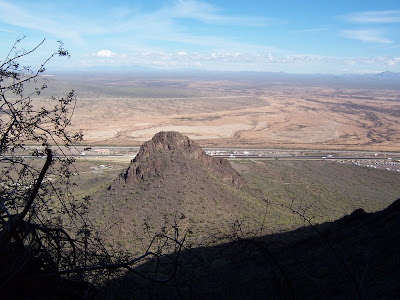 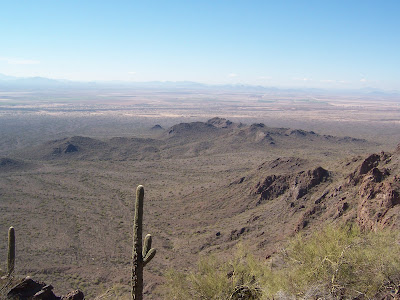 Once we climbed the first 1,000' we got to the top of the saddle and could look westward. 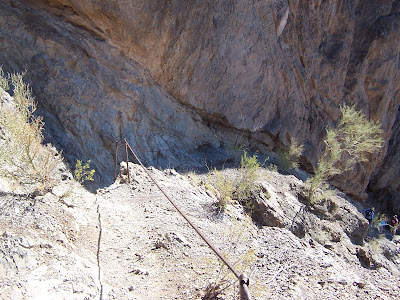 ....The view we didn't like was where the trail went next... down, down, down. If you double-click to enlarge this photo and look to the bottom right of the photo, you can see people lower on the trail. 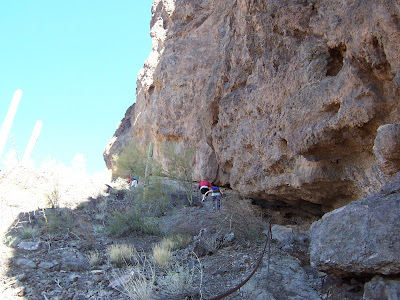 Once we were down a ways, Nolan took a photo of people climbing up the trail back to the saddle. 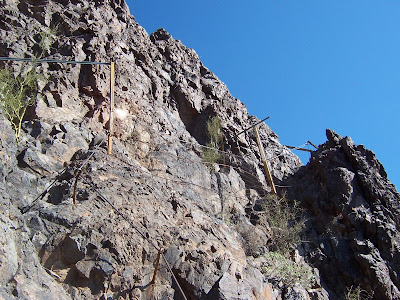 After a while, we started climbing again. Some of the climbs were places we pulled ourselves up with a cable then scrambled along a narrow ledge. All we had to do was make it around this corner and we would almost be there. Yeah! 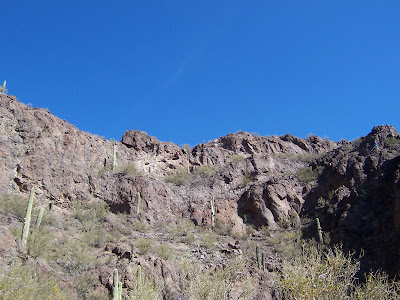 What we actually saw when we got around the corner. Oh man, that's a long way to go yet. If you enlarge this photo, you can see another cable run to the right and someone standing on the top. 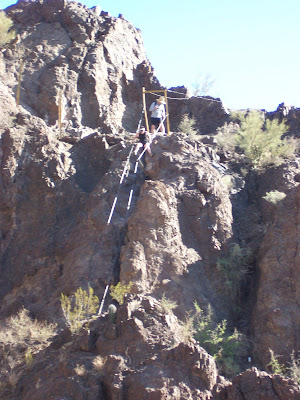 ...The next cable-assist area was almost vertical. This couple went forward. Looked iffy to me. 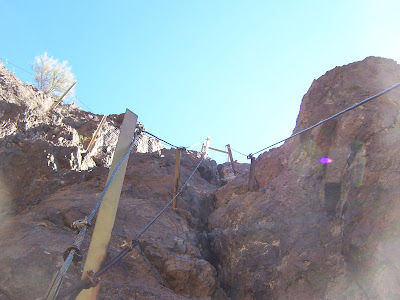 ....We finally made it to the bottom of that vertical climb. Doesn't that look like fun? 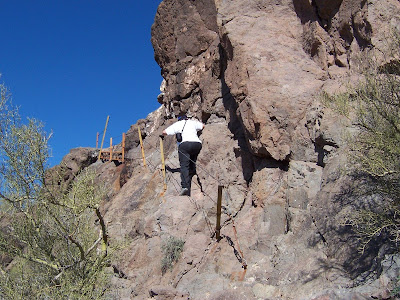 ...We got past that climb and almost immediately saw this one. Not quite as bad but still something I wouldn't do without a cable. At least we would be almost to the top once we got to the top of it. 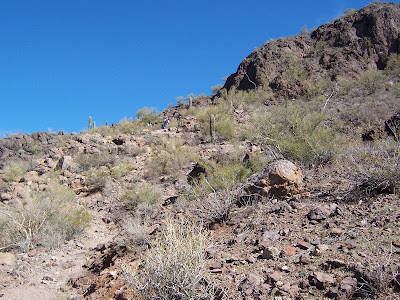 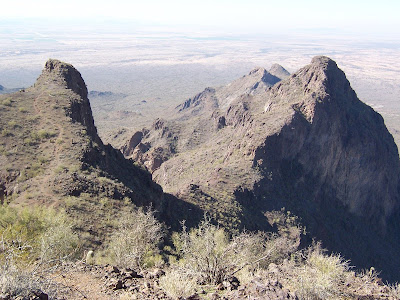 From this point we turned around and we could zoom in on the saddle where we had crossed earlier. 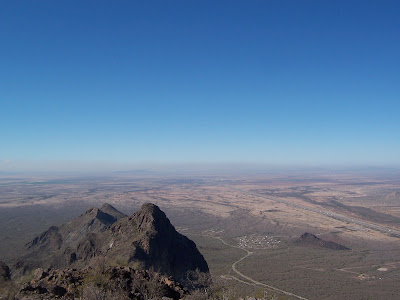 Finally we made it to the top!!!! The next few photos show what we saw from the top. Not the most picturesque view. It only took us two hours to get the two miles to the top. 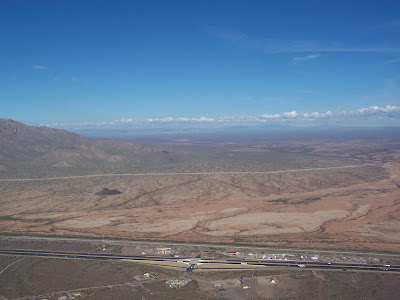 ....I think the white line is a water canal. 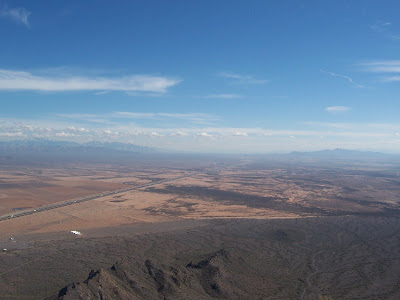 ...This photo to the south shows the snow on the Santa Catalina Mountains. Looking to the SE we could see four layers of mountains. 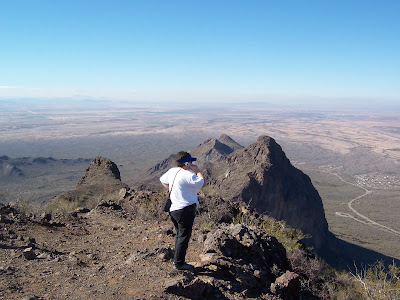 ...What would you do if you were on a mountain and had cell phone reception? Well I called my parents. I knew my Dad would be interested in our climb ( and probably glad he was sitting in his recliner instead of being with us!). 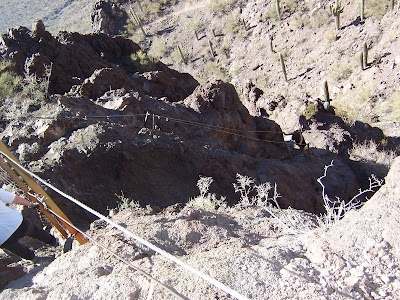 ...The place I dreaded on the way down. I can climb but I hate to go down. You can't see where to put your feet! 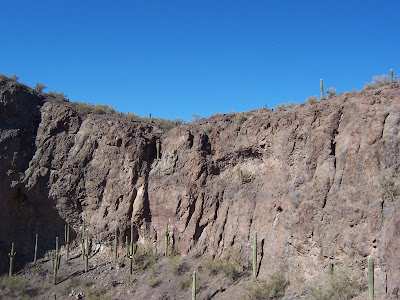 Nolan was amazed how some of the saguaro were perched on the edge of the rocks. 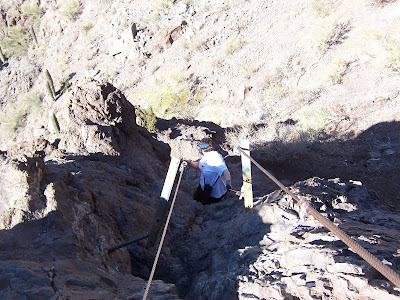 ....The descent wasn't as difficult as I had imagined but it was interesting. 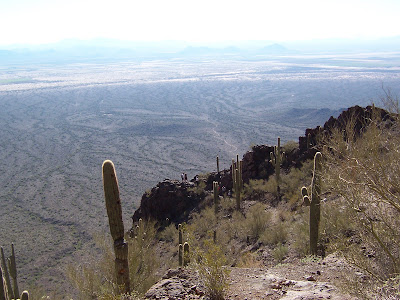 ...This photo really shows where the trail went. Please enlarge this photo and see where the people are at the edge of the mountain. That's the top of one of the cable climb areas. They were waiting for someone to finish their climb. 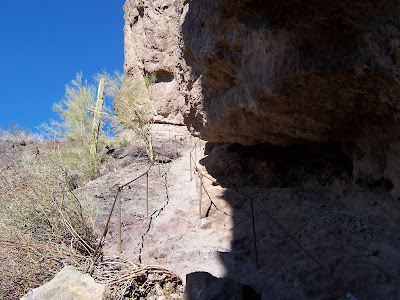 ..Did I say that the vertical climb was the part I dreaded most? Oh but that was wrong. The climb back up to the saddle was the worst! I think we took five breaks on the way up this. But most of the rest of the way was down hill so I let gravity assist me as much as possible. I couldn't run down it because there was lots of loose gravel and the trail wasn't straight. The climb to the peak and back took us four hours just like the sign at the start said. I wished I had read it before we started...or maybe not.
Posted by Nolan and JoAnn at 5:51 PM