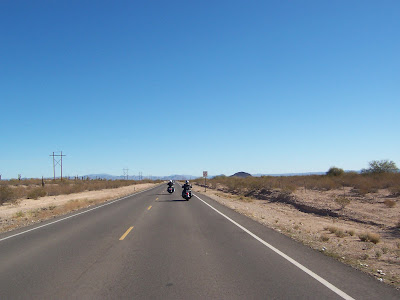 On January 3rd, Nolan, our friend Corky and myself rode to Coolidge Dam. It is southeast of Globe, AZ just off Hwy 70. First we rode through the valley for about an hour. 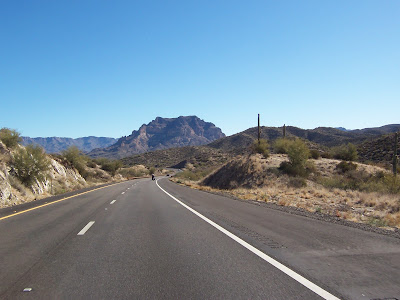 Then we got onto Hwy 60 and headed east into the mountains. 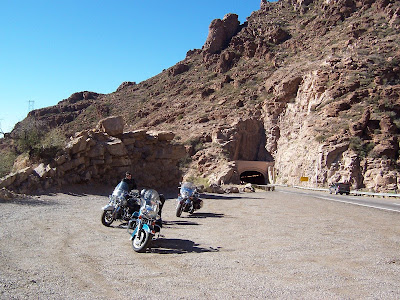 ......As we climbed the temperature dropped. It was supposed to get to 70° at Casa Grande this day but it was 15° cooler in the mountains. We stopped at this pull off just east of the tunnel that is east of Surprise, AZ. 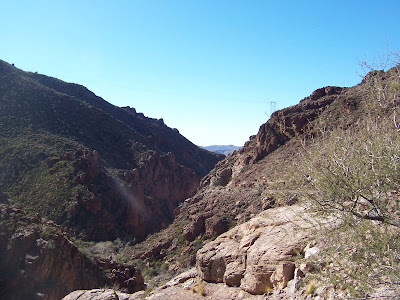 .......A look down the canyon at the pull-off. We stopped here before three years ago. Lots of bikes passed this spot while we were stopped. 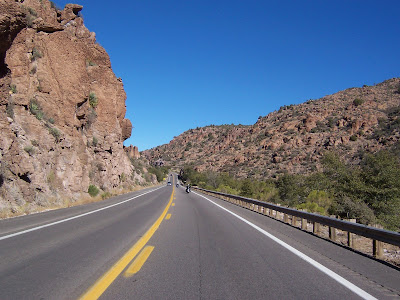 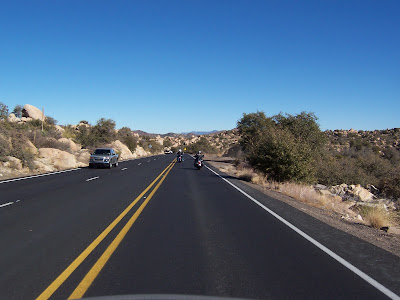 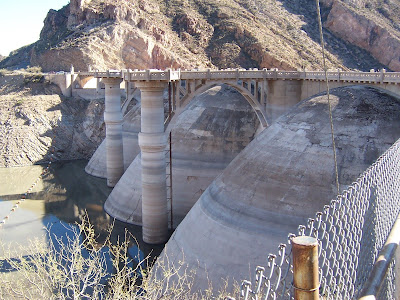 ...It took a while but we made it to Coolidge Dam. One of the weirdest looking dams I've ever seen. Wikipedia says it is a "reinforced concrete multiple dome and buttress dam and was built between 1924 and 1928. It's named after President Calvin Coolidge. Check Wikipedia -
http://en.wikipedia.org/wiki/Coolidge_Dam for a better description. 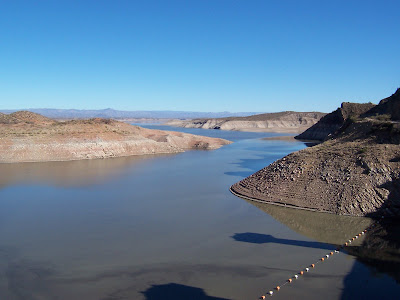 There wasn't much water in the lake but I guess there usually isn't. It was at least 50' from the top of the water to the bottom of the spillway so it would take massive amounts of water just to get one drop to go over. 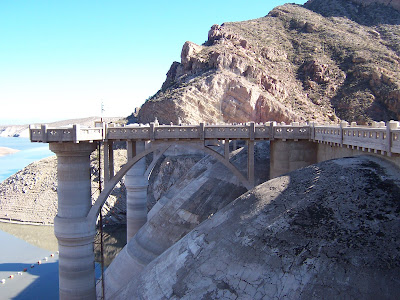 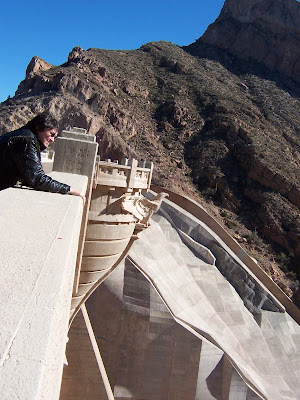 Looking over the spillway. See the eagle sculpture on the side of the bridge? We got dawgone cold during this ride but we thawed out by the time we got home.
Posted by Nolan and JoAnn at 7:19 PM

Hope you also stopped at the Casa Grande National Park. I checked out that dam a dozen-or-so years ago and have seen archival film of the March 1930 dedication. Former president Calvin Coolidge dedicated "his" dam. Will Rogers -- a friend of the president -- was on hand & wrote about it, saying: "Cal did a damn fine job of dam dedicating." Rogers also had pointed remarks about how the dam was not going to benefit the Indians whose lands had been taken. (Rogers was part Cherokee and Coolidge our first president to acknowledge he had "Indian blood".) On that day "Silent Cal" smoked a ceremonial pipe with his "brothers". He was made an honorary tribal member & given the name, "Chief Silent Waters." Rogers remarked that, "Cal coughed about a car-load." Some of the pipes smoked in the Coolidge administration are on display at the Forbes Library in Northampton, Massachusetts. Well worth a visit! On one pipe, in beautiful turquoise inlay, is a marijuana leaf. I've always thought this was the Arizona pipe. That would be cool.