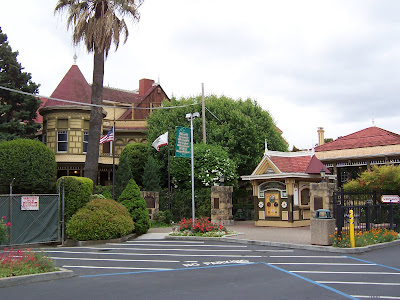 So have you heard of the Winchester Mystery House in San Jose, CA? Well I had years ago and just had to see it since we were in the area. You need to go to www.winchestermysteryhouse.com to get good details but it has this short explanation. "No one has been able to explain the mysteries that exist within the Winchester Mansion, or why Sarah Winchester kept the carpenters' hammers pounding 24 hours a day for 38 years. It is believed that after the untimely deaths of her baby daughter and husband, son of the Winchester Rifle manufacturer, Mrs. Winchester was convinced by a medium that continuous building would appease the evil spirits of those killed by the famous "Gun that Won the West" and help her attain eternal life. Certainly her $20,000,000 inheritance was sufficient to support her obsession until her death at 82!" 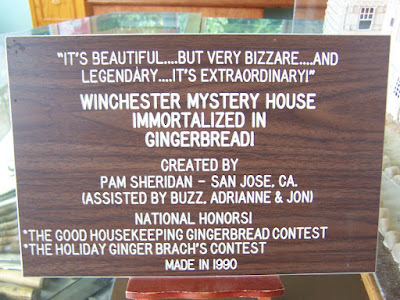 While we waited for our tour to begin, we toured the gift shop and the Winchester Products Museum where we found this. Looking at the construction of the house you can see that Mrs. Winchester was both crazy and brilliant. She had innovations built in that were way before their time including radiant heat floors, floating foundation and the rotating washer system for washing the cards. 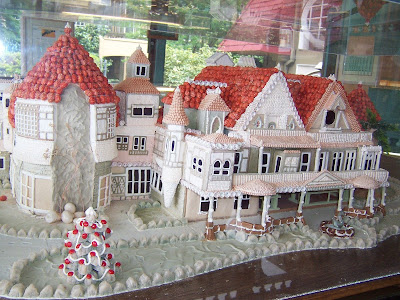 We were not allowed to take photos during the tour of the mansion but we saw all the highlights including doors and windows opening onto blank walls, a window in the floor and several doors that opened into empty spaces. 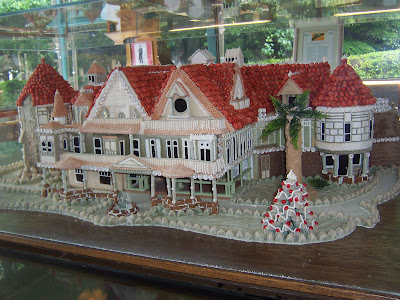 Mrs Winchester had many employees to take care of the house and grounds. They were paid well above the regular wages of the time and she provided free housing and education for all of them. 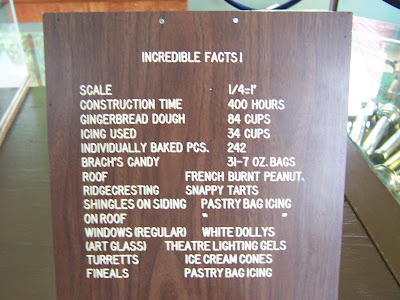 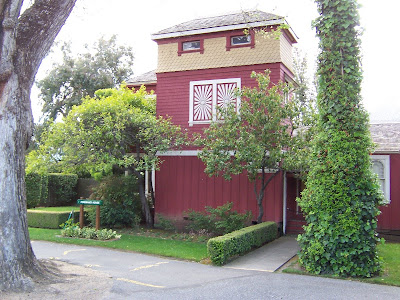 Once we got outside, we took a walk around the grounds. This is the Foreman's House. It had 8 rooms complete with indoor plumbing nd electricity. 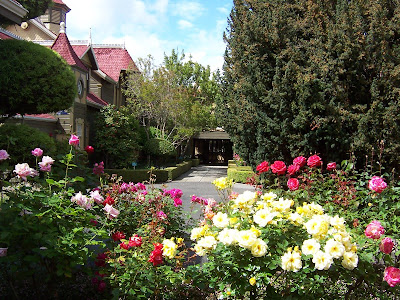 This is where the carriage road enters the house. The garden includes plants from over 110 different countries. 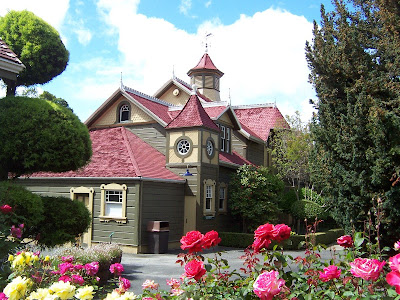 The photos they have in the house that show it from the air really show how rambling it is. It used to be 7 stories high but the 1906 earthquake made two towers so unstable that they were torn down. 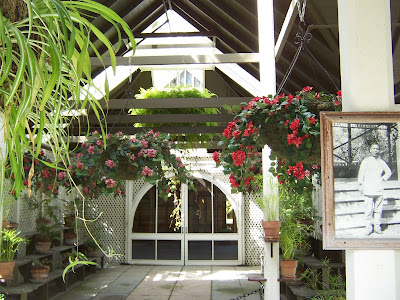 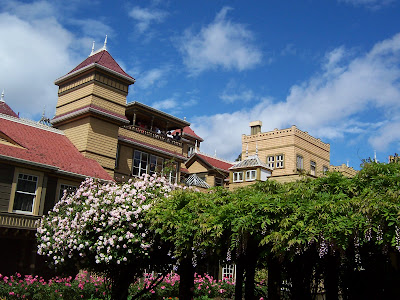 You can see people on the fourth floor balcony. We were there before the tour ended. 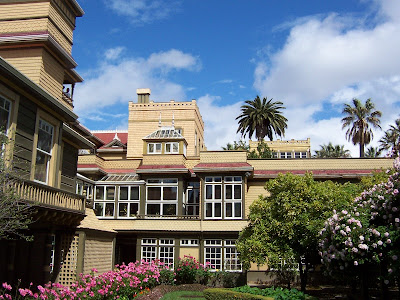 The spot with all the windows is the south conservatory. 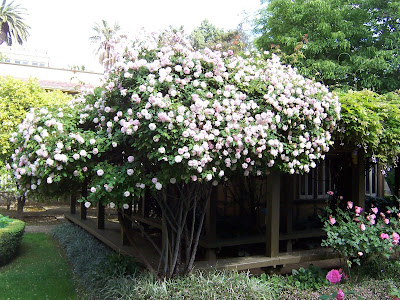 Supposedly there is a huge Monkey Puzzle Tree on the property but we didn't see it. 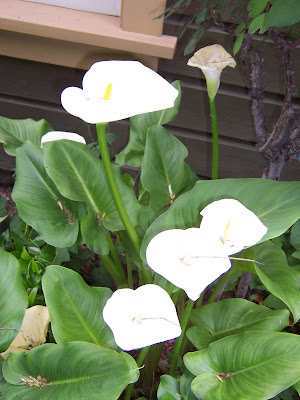 There were a lot of calla lilies. 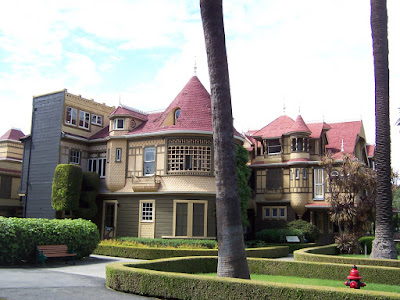 As we moved toward the front lawn we finally got to see a good view of the house. The black area is an area that was unfinished at the time of Mrs. Winchester's death. Look at the tree that is growing up alongside the black area. The next photo is a closer shot. 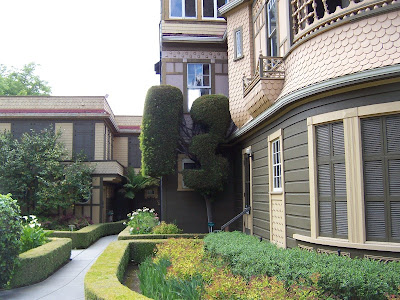 We didn't see what it was until we got up close. Yeap, the number 13. There are many 13's built into the house because Mrs. Winchester thought it was a lucky number. 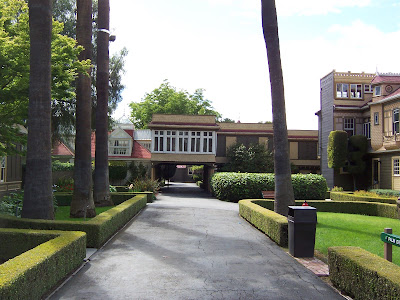 This is the main drive as it comes off the street and approaches the house. Mrs. Winchester had 13 palm trees along it. 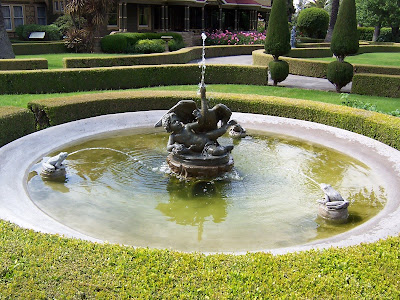 This is the cupid fountain with the water coming out of a swan's mouth and the mouths of three frogs. 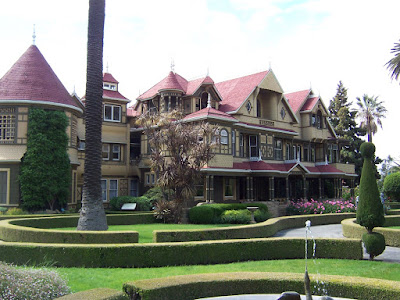 Nolan really thought the hedges must be machined trimmed because they are so uniformally square. 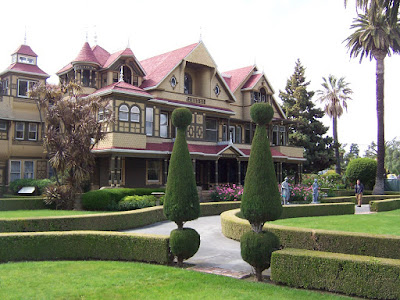 Notice the bushes in the front? They are shaped just like the finials on the roof. 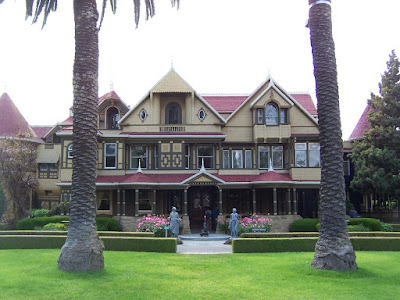 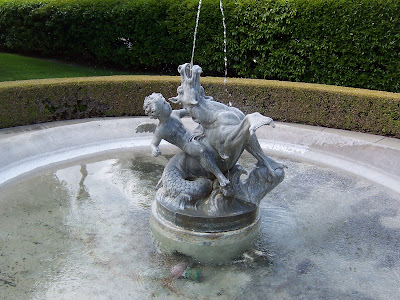 This is the Cherub fountain. The Cherub ( a small boy) is riding a Hippocampus (a sea monster that has the head of a horse and the body of a fish). 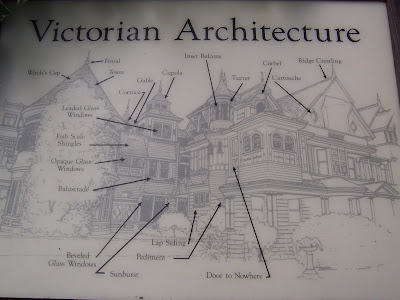 It's hard to see this but it's a chart of architectural features of the house. 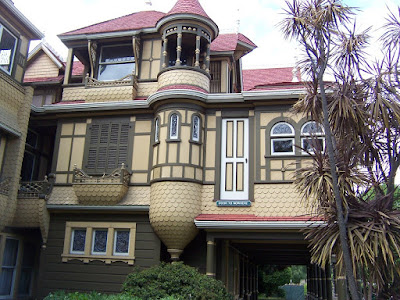 This photo shows some of those architectural features. If you double-click the photo, it will enlarge so you can see the 'Door to Nowhere". We saw the door from the inside. 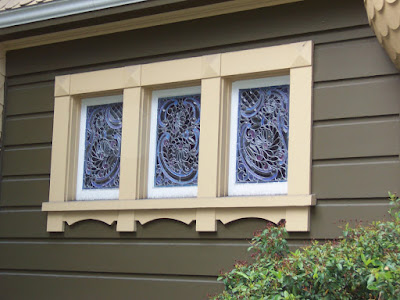 There were so many beautiful stained-glass windows in the house, some not even installed. One room holds the un-installed stained-glass and it is called the $25,000 room because it holds $25,000 worth of stained-glass. 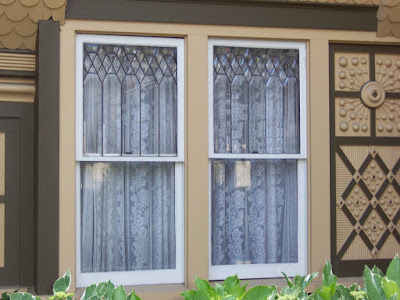 Beveled glass is prevalent in the house. 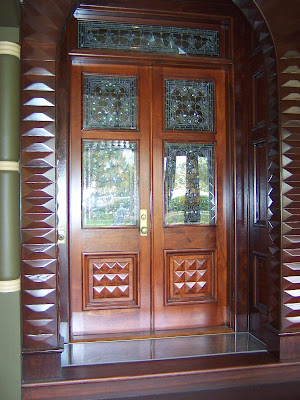 The beautiful front doors were only used by three people... Mrs. Winchester and the two carpenters that installed them. They were installed right before the 1906 earthquake. That earthquake trapped Mrs. Winchester in her bedroom and caused her to board up the front 30 rooms of the house. 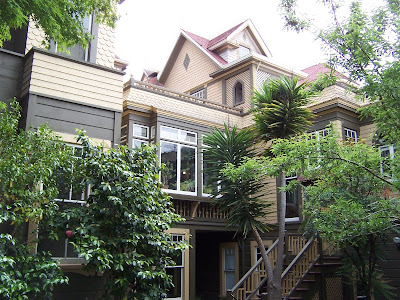 Our final look at the house before we left the premises. We toured 110 rooms of the 160 room mansion. It is estimated that 500 to 600 rooms were built over the course of the 38 years of 24/7 construction.
Posted by Nolan and JoAnn at 6:06 PM