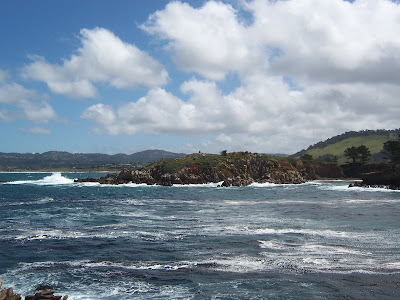 Point Lobos was described by landscape artist Francis McComas as "the greatest meeting of land and water in the world". Well this point does have some dramatic scenery. We started our hike at Whalers Cove, where scuba divers were having fun. From here we got on the North Shore Trail and started walking the perimeter of the point. 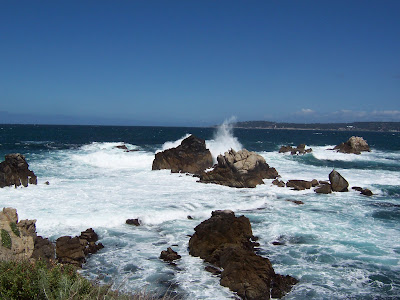 There were a lot of rocks off Cannery Point and the surf was pounding. It was a windy day so the surf was up. 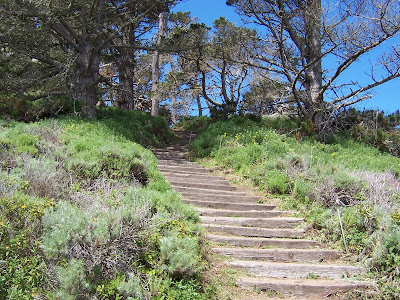 The climb toward Bluefish Cove. 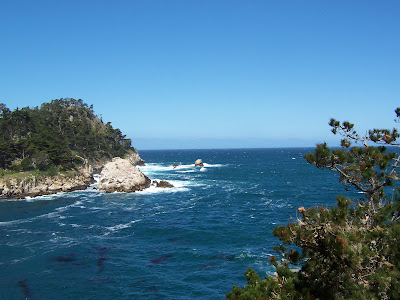 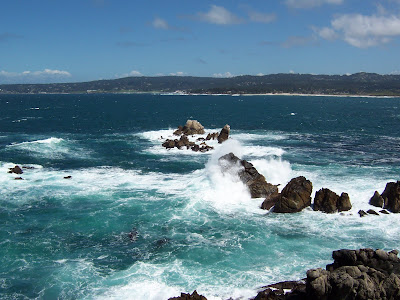 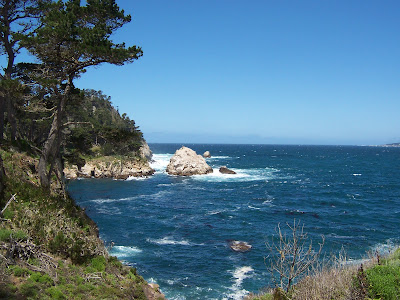 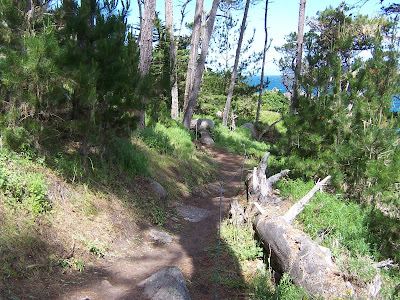 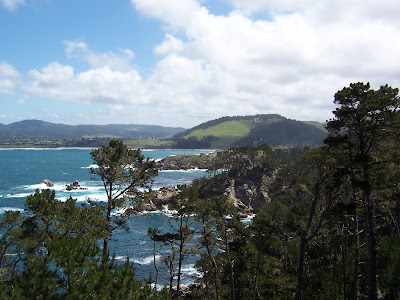 Looking backward after we started hiking up Whalers Knoll Trail. 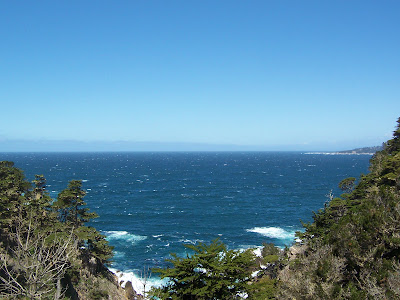 This is the view from the top of Whalers Knoll. From this prometory a signal flag was raised when whales were signted and lowered when the boat crew was heading in the right direction. Monarch Butterflies congregate on this knoll from October to March. It was cold and windy this day in late April so it's hard to believe Monarchs stay here in the winter time. 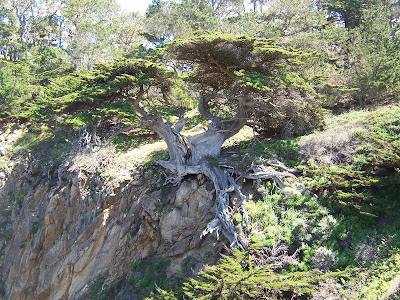 Once we got back down to the North Shore Trail we took a side trail called Old Veterans Trail. This old cypress clinging to the side of the rock is called Old Veteran Cypress. Point Lobos was originally acquired to protect the Cypress trees. Some of the trees and rocks on the norh-facing slopes are covered in an orange, velvety layer of green algae. The orange color comes from carotene. Supposedly the algae doesn't harm the trees. 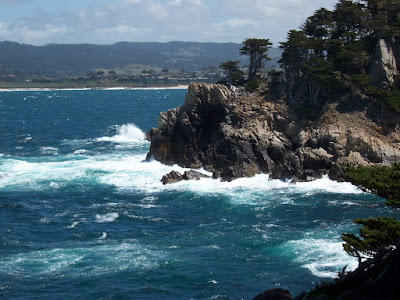 .. The next trail we hike is the Cypress Grove Trail where we see the prettiest views on the Point. 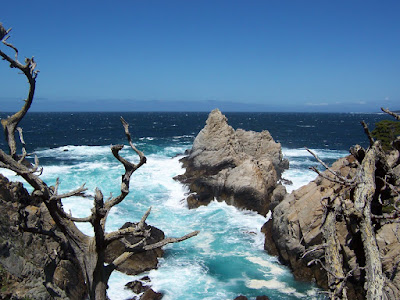 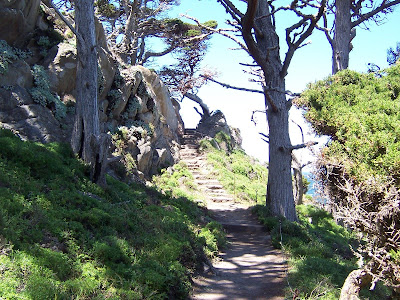 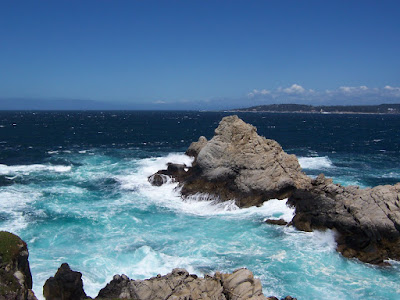 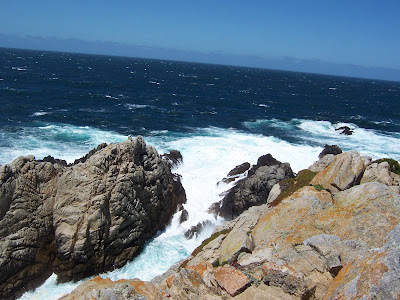 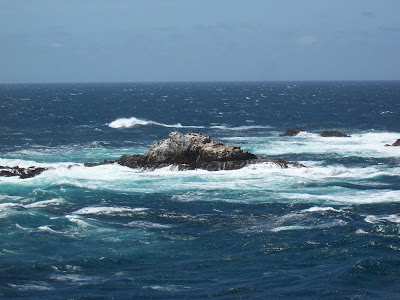 This rock is home to California Sea Lions. The name "Point Lobos" refers to sea lions and their barking. 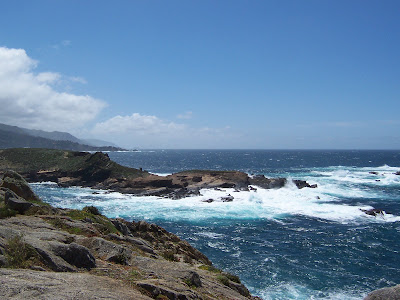 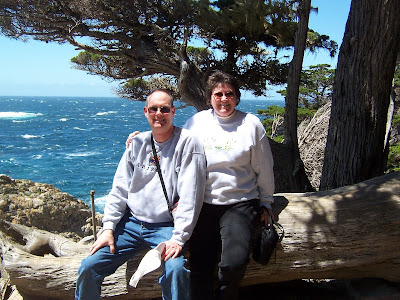 Some other visitors agreed to take a photo of us. 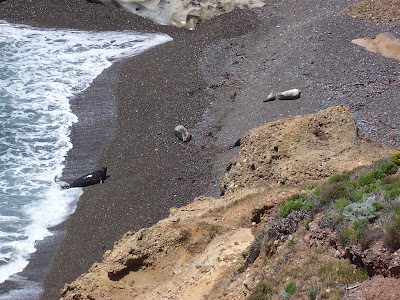 Harbor seals and sea lions were enjoying the beach on Sea Lion Point. 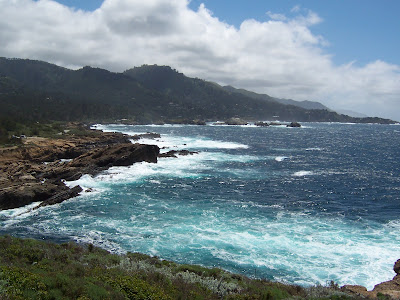 Looking south toward Sand Hill Cove and down to Bird Island. 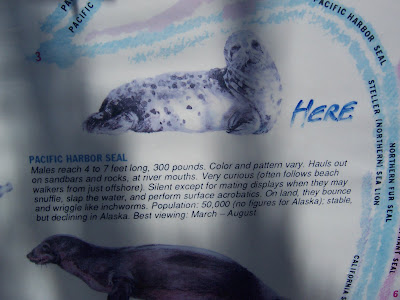 The information booth at the Sea Lion Point parking area gave us information on the sea lions and seals that are here. 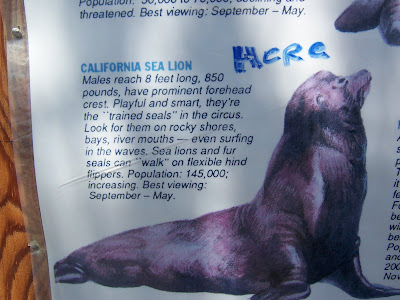 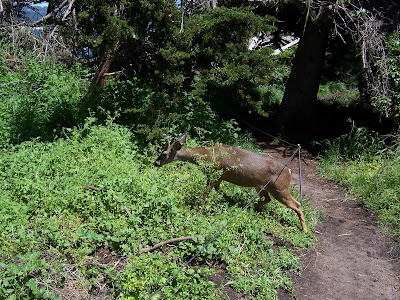 ....As we walked the North Shore Trail back to our car, we encountered deer in the trail. They sure weren't bothered by our presence. 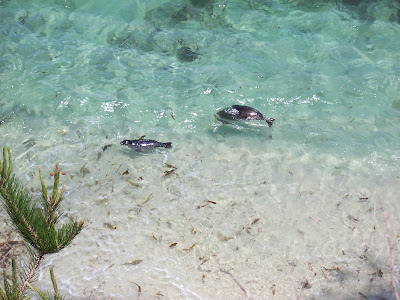 When we got back around to Bluefish Cove seals were playing by the beach. 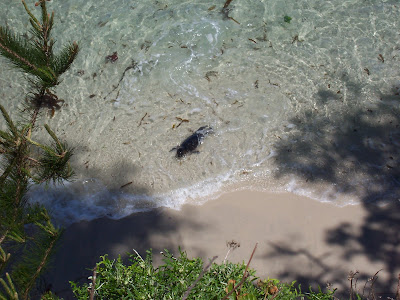