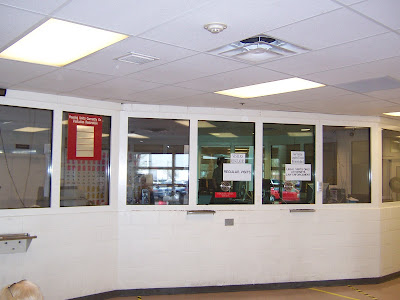 I heard that groups could tour the Maricopa County Tent City Jail in Phoenix so I set up three tours for Sunscape RV Resort. As we enter the front doors there were signs listing the rules. Inside I walked up to this counter to tell them the group for Sunscape was here. 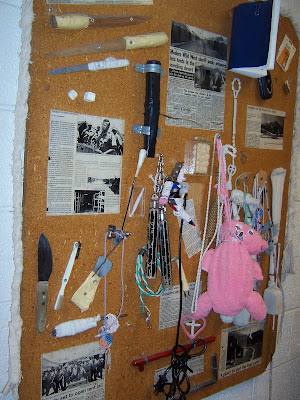 The start of the tour took us past this display of items that inmates had made. They're creative when they don't have much to do. 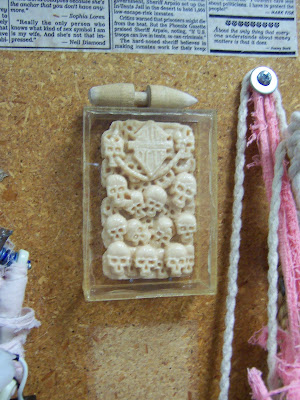 The carving in the middle is made out of soap. Pretty talented, huh? 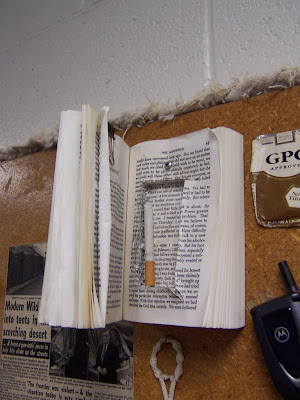 Always gotta have their contraband. 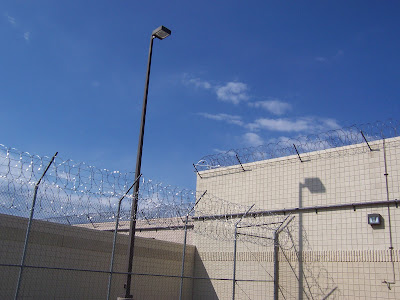 Once outside that building we were inside a high fence with razor wire all around. We weren't even to the area where the inmates were kept. 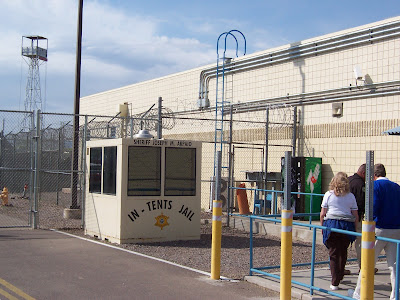 ...We went back out a gate then passed this guard shack and entered another building. Yes we were entering the In-Tents Jail. Hilarious, huh? 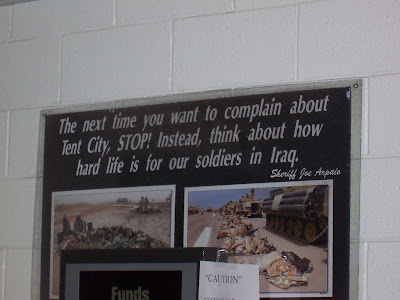 This sign in the entry really makes the point that the prisoners in this jail have it a lot better than our troops in Iraq and Afghanistan. 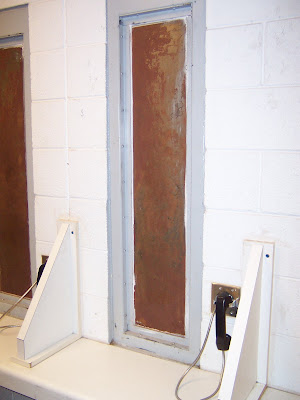 The prisoners used to see visitors through these windows via a phone link. This is the old way and the windows are now painted over. 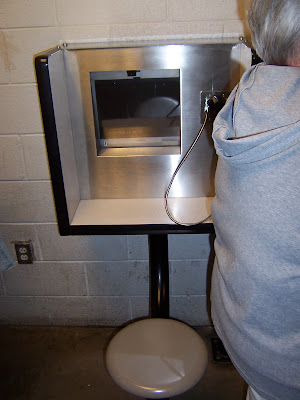 The new way is via monitor with a phone link. There conversations are recorded. The prisoners are actually sitting at the same place but the visitors have been moved across the hallway. We weren't allowed to take photos in the day room that we walked into. Prisoners roam freely in this room and have one TV on which they can watch the Disney Channel, CNN or the Weather Channel. 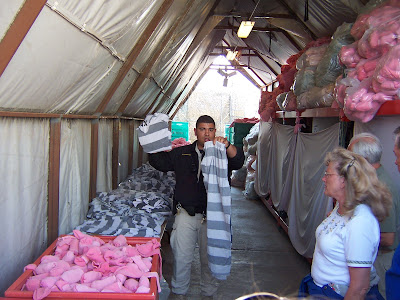 ...We went through a gate and into this tent where prisoners returning from work duty are strip-searched and given a set of clothing. Most prisoners go out daily to work somewhere. Sometimes they get to work at the food distribution area where they package up the meals for each inmate. The officer is showing us the striped outfits each inmate wears. The pink stuff in the bin are socks. Pink underwear is the trademark of the Maricopa County Sheriff's Office. 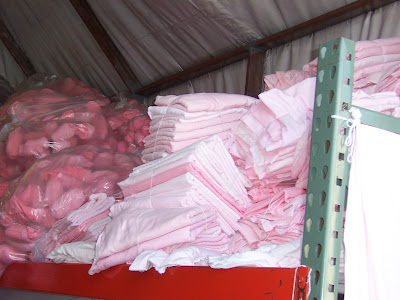 Even the sheets and towels are pink. Oh, the handcuffs are pink too. So many were disappearing as prisoners were sent to other jurisdictions that Sherriff Joe decided that they would have pink ones so they would be readily identified. We just watched a show on TV about the female officers of Maricopa County and I saw them put pink handcuffs on an arrestee. Yes the male officers carry pink handcuffs too unless they have their own set like the officer that was leading our tour. 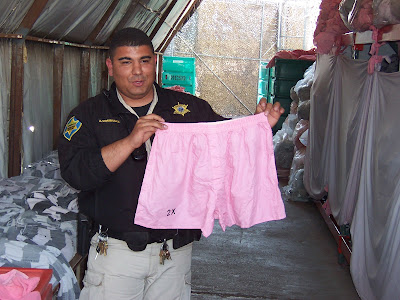 What's even funnier is that anyone can buy some pink underwear with the Maricopa County Sheriff's Office logo at http://www.pinkunderwear.com/. 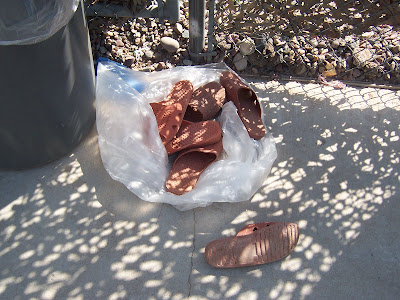 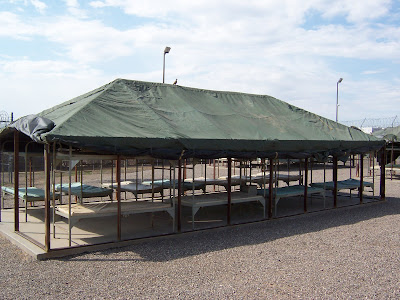 Then we entered a portion of the yard that was unoccupied. These are the tents the inmates sleep in. There are 22 inmates bunked in this size tent. The tents have metal framework because it lasts longer and the inmates can't use the rope and stakes as weapons. 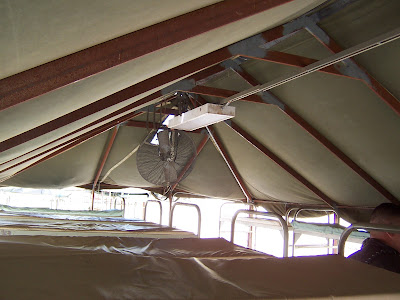 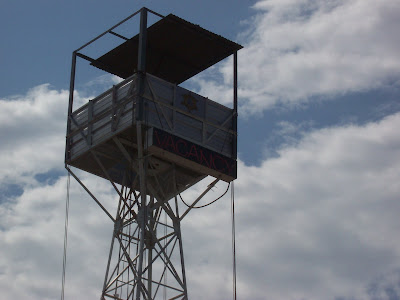 This is an old guard tower that is no longer used due to stringent OSHA regulations. It didn't photograph well but there's a sign at the bottom of the tower floor that flashes "Vacancy". 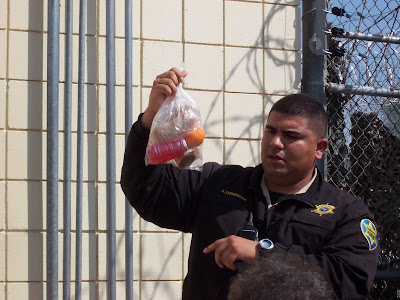 The officer leading the tour shows us one of the two bags of food each inmate gets every day. Yeap, they're only fed twice a day. That gives them the full calorie requirement dicated by law. No hot meals here. 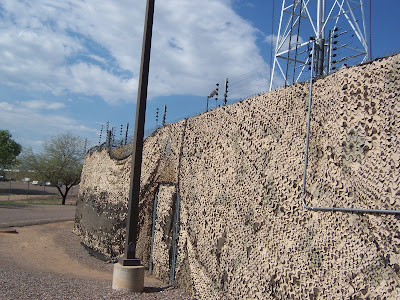 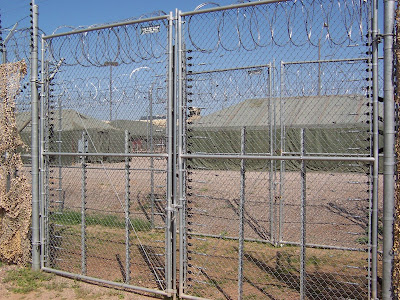 ...At the one spot where there wasn't strips, we could see there were two layers of fences topped by razor wire. 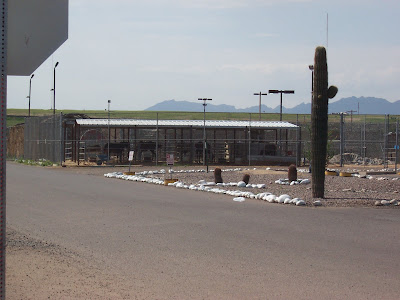 There are several different prisons here. This is where they take in people that have been accused of mistreating animals. The animals are kept here as evidence. At least here they are cared for. Another section of the prison is called the "Con-Tents Jail" LOL 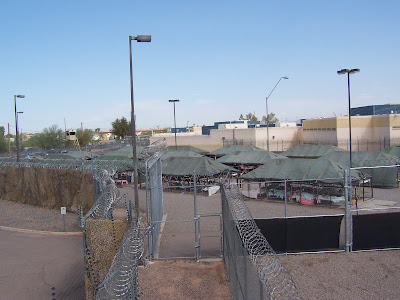 At the corner of the yard on the outside of the fence is a guard shack mounted on a lift. Nolan and one other person got to ride to the top and looked out over the yard. The windows are really dark so the inmates can't see if someone is in the shack or not. 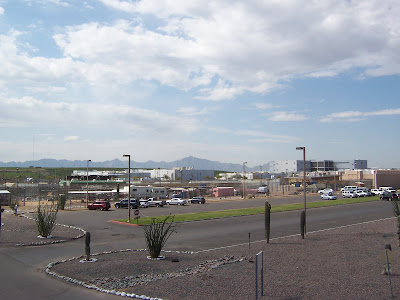 The bluish-white building in the background is Con-Tents.
Posted by Nolan and JoAnn at 12:41 PM

It's pretty stupid to write a blog laughing about the plight of prisoners, then including your personal info, including photos. You may want to consider removing your post? Oh yeah, I hope none of your friends are ever stopped after having a few beers at any buffets in Maricopa County. Or the "All You Can Eat Fish Fry", or golf courses, etc. Old dudes are jailed just as easily as young ones, and you will get no special treatment from Maricopa's Finest. Good luck, geezer.