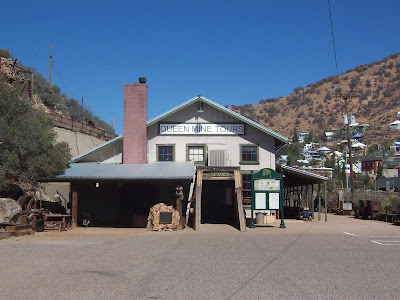 Our vacation began by driving to Benson and staying at an RV park with an observatory. I'd have a picture of Saturn here if I could have gotten one! It was incredible! Before I go any further, I have to credit http://www.queencreekminetour.com/ with most of the folowing text. The second day we drove to Bisbee, one of the greatest copper camps the world has ever known. In almost 100 years of continuous production before the Bisbee mines closed in 1975, the local mines produced metals valued at $6.1 billion (at 1975 price) one of the largest production valuations of all the mining districts in the world. 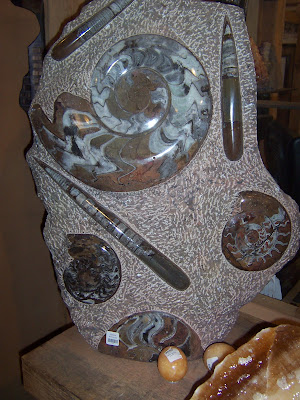 The mine tour building has a gift shop with some wonderful stuff. This block of polished ammonites would look lovely in our trailer but Nolan wouldn't let me get it. I'm sure it isn't light but the price tag was the scary part.

The story of Bisbee mining began in the late 1870’s when Lt. Dunn, in charge of a cavalry detail from the frontier Army post of Fort Huachuca, was on a scouting mission against the Apache Indians. Lt. Dunn and his men headed for a spring in the Mule Mountains to camp for the night. The party camped on a spot of fairly flat ground in the canyon below the spring—a site now occupied by Old Bisbee, only several hundred yards from the beginning of today’s Mine Tour. On a walk after dinner, Lt. Dunn picked up an interesting rock. He found a few more pieces along the slope of the south wall of the canyon. Unable to do anything about it because of military duties, Dunn took a prospector by the name of George Warren into his confidence and struck up a deal by which Warren would locate claims and work the property with Dunn as a partner. But on his way to the site, prospector Warren stopped to visit some friends and enjoy his favorite pastime—whiskey drinking. He soon has new partners and they staked a new group of claims and left Dunn out of the deal. When Dunn came along later to check, he was on the outside looking in. 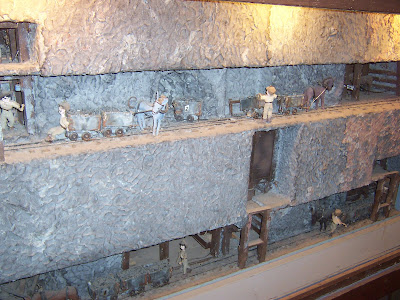 There were several different displays showing the mining techniques over the years. It took 3 or 4 men to push one of the one-ton ore carts but a donkey could pull four. There are seven layers to the mine and donkeys were stabled at each level. 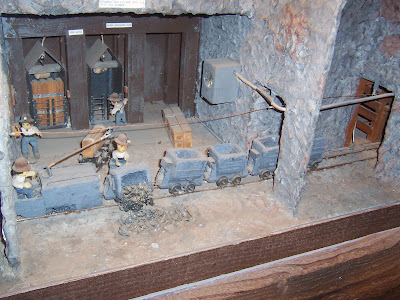 In the early 1900's electricity provided the power to move the carts. Bare cooper lines were hung from the ceilings. The engine that pulled us through the mine is powered by batteries.

Copper production began on a limited basis around 1880. Individuals and then companies with capital gradually became involved and took over individual claims and brought them into production. Phelps Dodge Corporation, through a subsidiary the Copper Queen Consolidated Mining Company, became the dominant force and eventually the sole operator of the mining district. Building on its base in Bisbee, Phelps Dodge has long been one of the largest copper producers in the United States. Phelps Dodge Corporation closed the Bisbee underground mines in the summer of 1975. Bisbee Mayor Chuck Eads, with the generous cooperation of Phelps Dodge, brought to reality the idea of opening a mine tour through a portion of the world-famous copper Queen Mine. Mayor Eads felt that history of mining should be kept alive in Bisbee and in a manner that would attract tourists to the community. Many faithful volunteers cleared thousands of tons of fallen rock and re-timbered the old workings. They were assisted by local individuals and groups who furnished support and food for the workers. The local effort came to the attention of a federal agency, the Economic Development Administration, which approved a large grant to the City of Bisbee to help the mine tour project and other improvements in downtown Bisbee designed to aid the tourist business.The Queen Mine Tour was officially opened to visitors on February 1, 1976. Since then, more than a million visitors, from all 50 states and more than 30 foreign countries, have enjoyed the ride into the mountain on the underground mine tour train. The Queen Mine Tour is an authentic mining experience and the tour guides are all experienced miners, having worked in the local mines for many years, and assure you a safe tour set against a background of factual information. 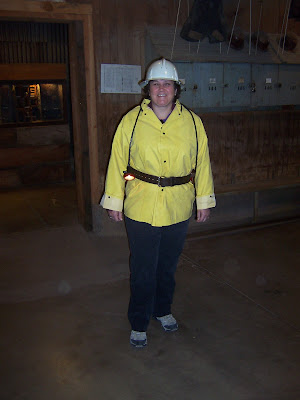 All dressed up for our mine date. 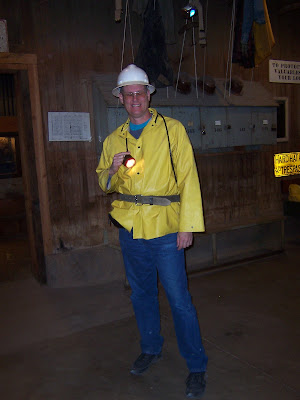 Nolan striking a pose dressed in the latest in mine gear. Hard had, yellow slicker and belt that held on the battery pack that powered the flashlight. 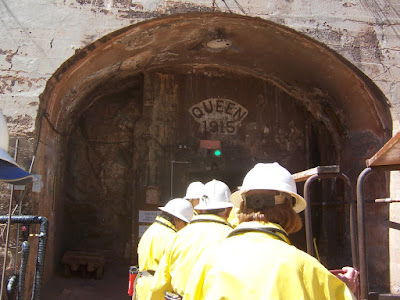 We straddled the tram and started into the mine at the third level.

A melting pot of immigrant miners from the mining districts of Europe labored beneath the Mule Mountains to feed the insatiable demand for copper and electricity. 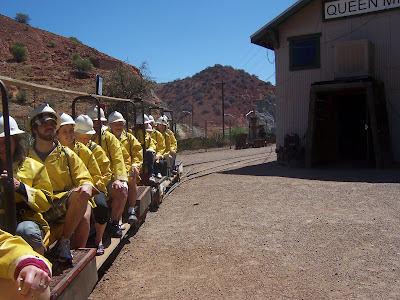 The tram had five or six cars. 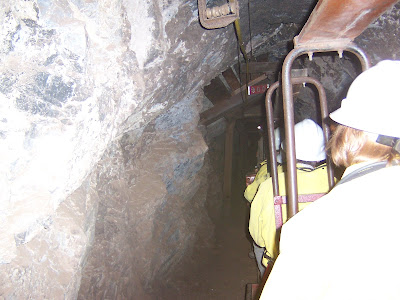 There wasn't much clearance around the tram so we kept our hands in. 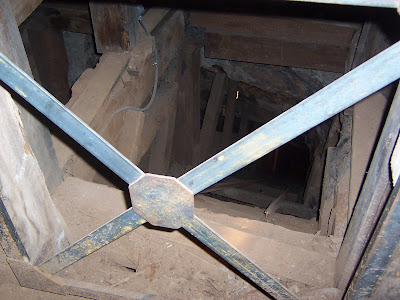 We passed the shaft that lead down to the original mine shaft. 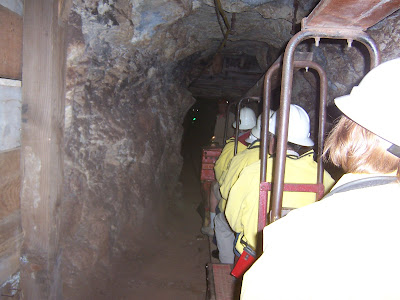 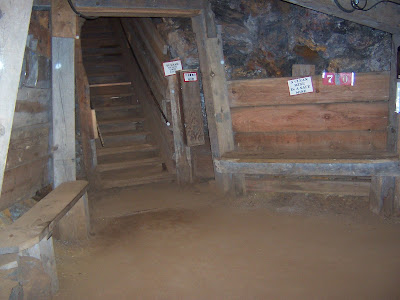 We stopped here and walked up 41 steps to a big open area. Because of the solid rock that formed it, it was not timbered. 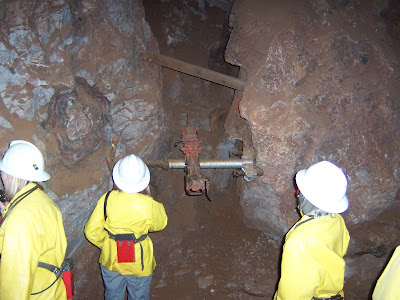 300 lb drill and its 150 lb support. Imagine negotiating the mine carrying that load! 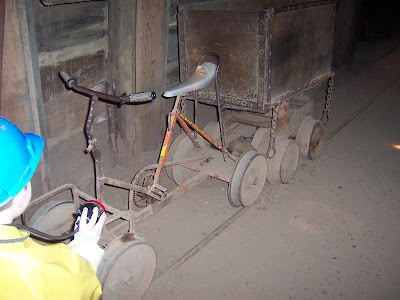 Further down the shaft we were shown the chutes where the ore from the upper levels came down to be loaded into carts. This bicycle was used by the mine supervisor to go around the mine to check acivities. 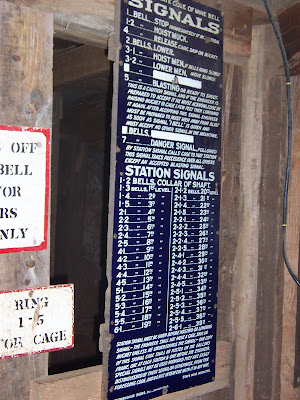 The elevator operator had to memorize this list of the different ring for different activities. The bell could be heard through all the levels. 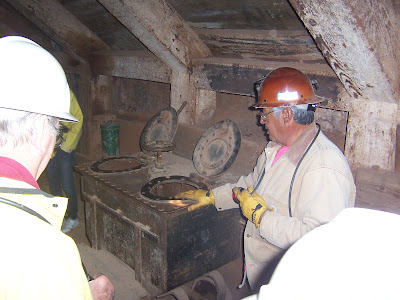 Oh yes... when nature called this portable toilet cart was available. The miner/guide we had told us the leather seats were extremely cold. When it was full, it was pushed to the elevator and taken topside to be dumped. 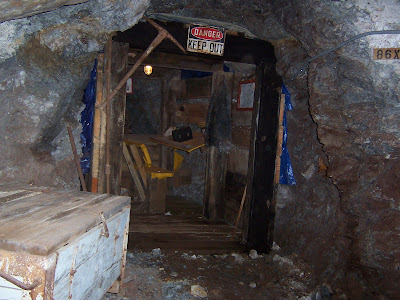 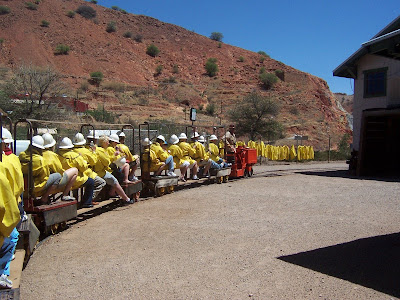 Back out into the sunshine, we could see the engine that had pulled us through the mine.
Posted by Nolan and JoAnn at 4:12 PM