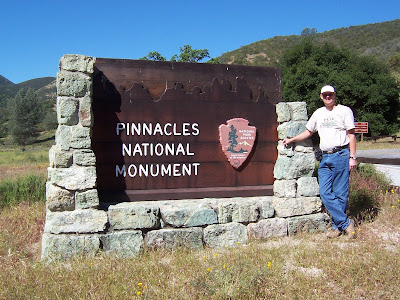 Have you ever heard of Pinnacles National Monument? I hadn't until I saw it on the map. Since we were going to be in the area, we decided to check it out. The rock formations at Pinnacles are 1/2 of an ancient volcano. Half? Yep, the other 1/2 is about 200 miles south and on the other side of the San Andreas Fault. See the volcano sat on two different continental plates, the Pacific and the North American Plate. The North American Plate is moving north and the Pacific plate is moving west. 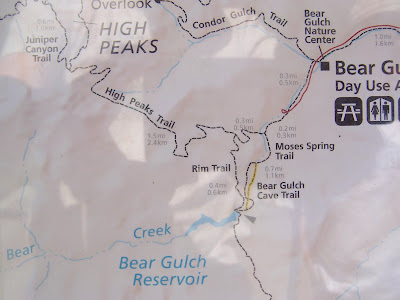 Since we had never heard of Pinnacles National Monument before, we didn't know what to expect but we checked out the various hikes and choose the loop formed by the Moses Spring Train and the Rim Trail. 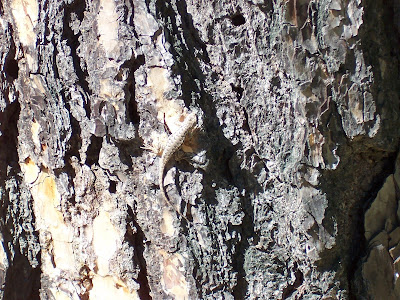 First thing we noticed is that there are lots of lizards running around. Nolan got several photos of them. Otherwise all we saw was birds (including quail) and a few squirrels. 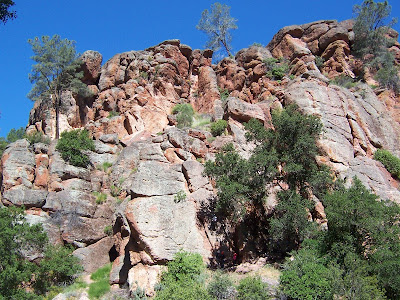 There are several rock climbing areas in the park. Instructors were teaching children how to climb a short section here. They are in the shade so you can't see them. 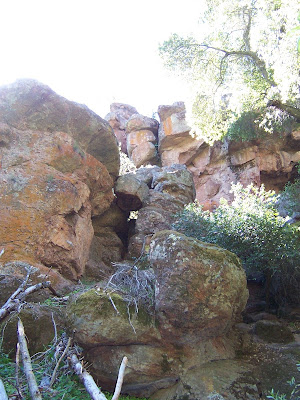 We followed a stream up into a canyon. Lots of boulders had fallen into the canyon forming piles. We had left the stream behind so we had been walking in a dry area. Suddenly there is water running across the path. We had found Moses Spring. 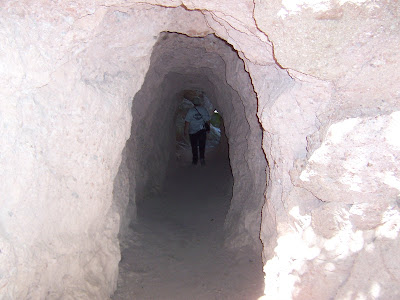 ...At one point the trail led us through an archway carved into the rock. 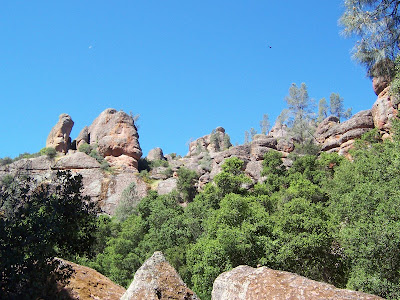 Just had to look up at the rock formations occasionally. 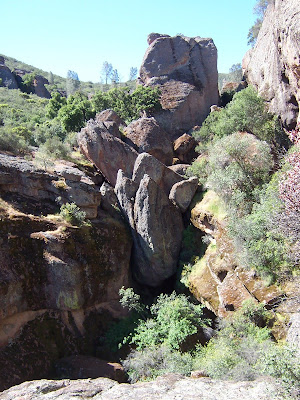 Another rock pile. There's actually a path to the right of this pile. 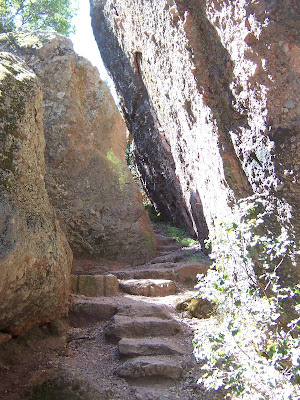 Sometimes the path got a little narrow. 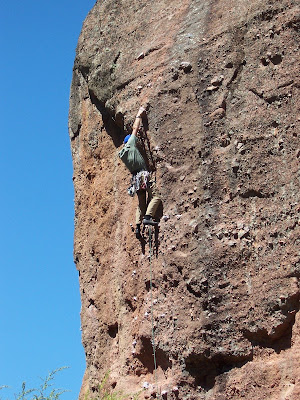 Then we came to where the experienced adults were climbing the rock. There were anchor points already in the rock that the climbers could clamp onto. 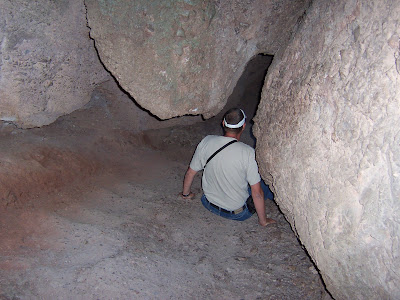 Then we came to another tight area where Nolan had to do some butt-scooting to get through. I managed to craw-walk through. 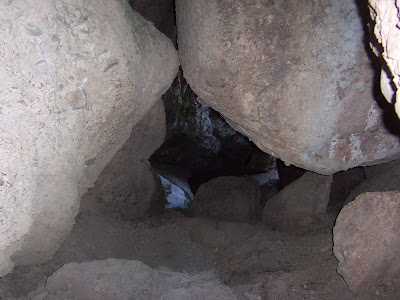 Another boulder to get under. 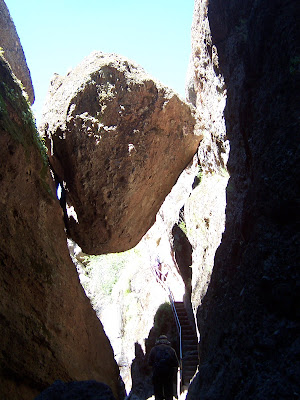 I know it is very difficult to see (double-click the photo to enlarge) but there is a staircase to the right and someone is actually on it. Water is running toward us from the right. We are nearing the reservoir. 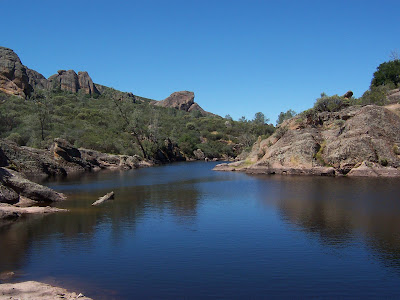 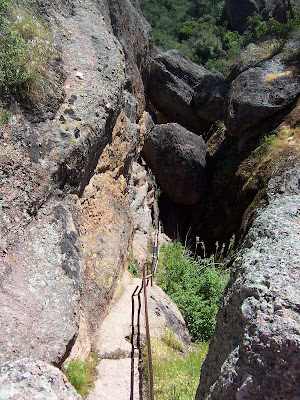 Looking back down at the stairs we climbed. 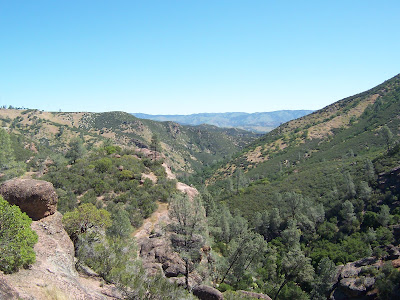 Next we headed up to the Rim Trail and got a good view. 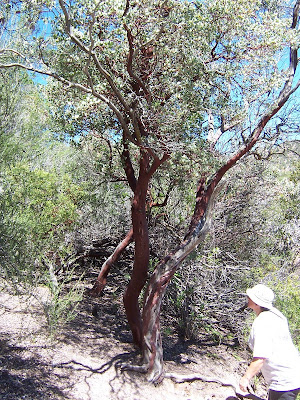 I found some very interesting trees but I still don't know the name of them. Should have asked the ranger that walked by, huh? It almost looks like a vine climbed up the tree and followed the underside of every branch. The "vine" part is a smooth reddish-brown and the tree bark is grayish. The trees were live. Look at the third photo to see what the leaves looked like. 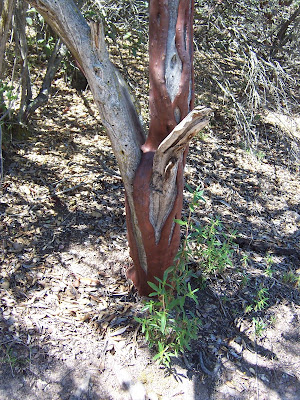 Wild, huh? Sure wished I knew what it was. I emailed Pinnacles so check back to see if I found out the name. Ok, by researching on line, I think it is a manzanita tree. Cool, huh? 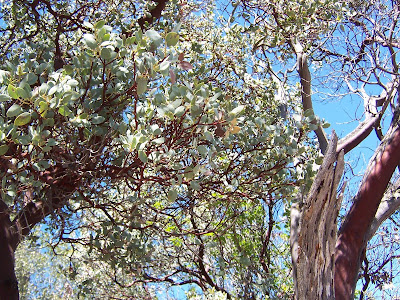 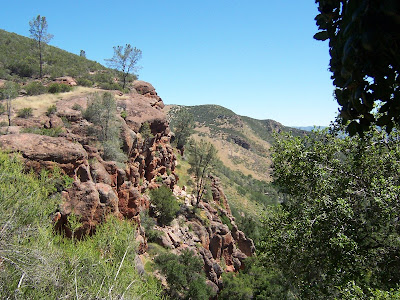 Just some more of the view.
The Rim Trail led us back down to the Moses Spring Trail.
Posted by Nolan and JoAnn at 4:07 PM