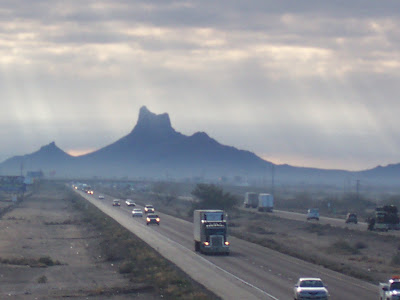 On the way to the CAP tour I took some photos of Picacho Peak. I think we've totally recovered from our hike to the top but it's always cool to get another photo of this landmark. 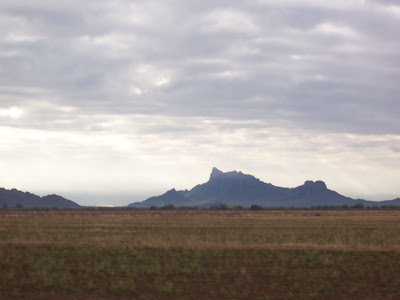 Shot from a different angle.

Straight from the CAP brochure: "CAP is a 336-mile long system of aqueducts, tunnels, pumping plants and pipelines . CAP carries water from Lake Havasu near Parker, through Phoenix, to the southern boundary of the San Xavier Indian Reservation southwest of Tucson." 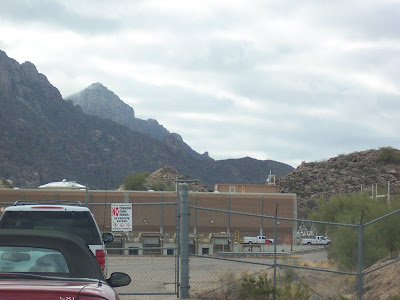 ...We followed a paved road to the gate at the CAP plant where we waited for someone to come open it. It is located at the base of the Picacho Mountains. The clouds were just clearing off and there were pockets of fog here and there. Back to the brochure: "The primary purpose of CAP is to help Arizona conserve its groundwater supplies by importing surface water from the Colorado River, whose supply is renewed yearly by rainfall and snowmelt. CAP also provides flood control, recreation, and fish and wildlife benefits." 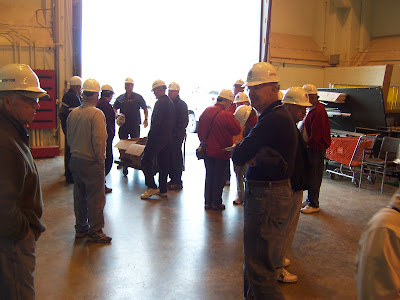 First they opened the large door. It telescoped as it went up. They let us in to get hard hats. Brochure: "In years of normal water runoff, CAP is able to deliver 1.5 million acre-feet of Colorado River water per year to Maricopa, Pima and Pinal counties. When the Colorado River has surplus water supplies, CAP can deliver 1.8 million acre-feet of water." Now we know why the Colorado is barely a trickle by the time it hits Mexico! 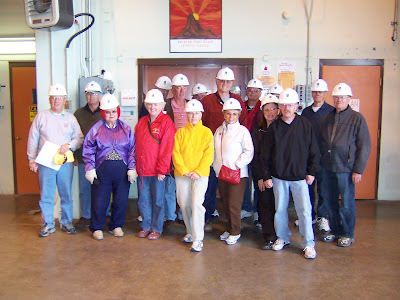 There were 13 people from Sunscape on this tour and we will be having one later this month too. Don't look to hard for me because all you'll see is the top of my hardhat. Brochure: " More than 25 million people are currently drinking Colorado River water everyday. Arizona, California, Colorado, Nevada, New Mexico, Utah, Wyoming and Mexico all rely on the river as one of their primary sources of surface water." 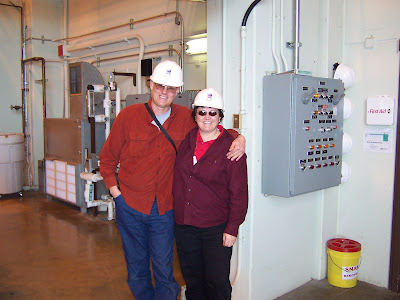 Someone did offer to take a photo of us and we gladly took him up on it. But I forgot to change glasses and wore my sunglasses into the plant. Brochure: " Arizona residents are generally using more groundwater than is being replenished by nature. This groudwater overdraft has made pumping water more expensive, decreasing its quality because impurities are found closer to the bottom of the aquifers, and caused earth fissures and land subsidence in many areas. Problems will continue unless we lessen our dependence on groundwater and start using more surface water." Most of the water is used for agriculture. 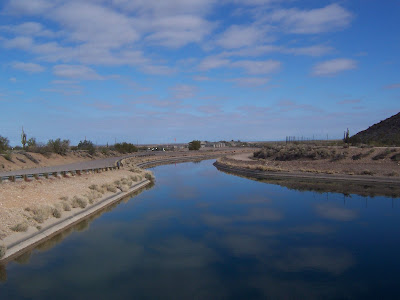 ...We moved outside to begin the tour. We were told the canal water is moving at 15 mph as it runs along its concrete course. Animals, and even humans, that fall in can seldom get out. There are ladders every 1,000' but you have to get to them. As the water gets to the intake, we could see it swirl. There are six 4' intakes but only two were operating this day. 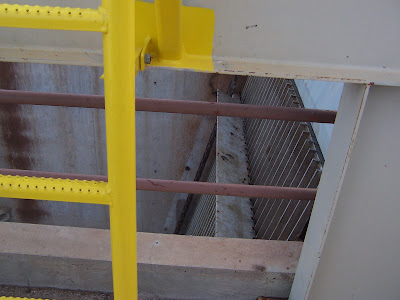 ... The water first hits a grate where large items are taken out of the water. Those include fish (any fish found in the Colorado River can also be found in the canal), dead animals and tumbleweeds. This rake scrapes stuff off the grate, pushing it up to the top where it is pushed over. 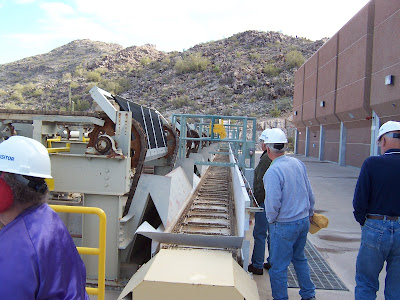 Once the debris goes over the top, it falls onto this conveyor belt and is conveyed to a dumpster. 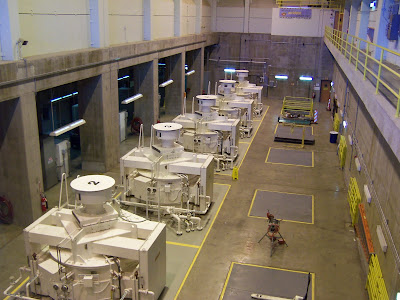 ....We moved back inside and looked down a level to the top of the 5,500 HP motors. Notice the hatches in the floor. 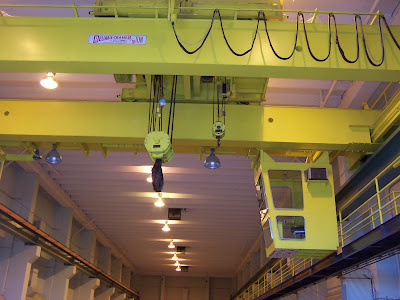 Looking up, we saw a crane. The crane is used to move thing through the plant. The hatches in the floor give access to the lower levels. 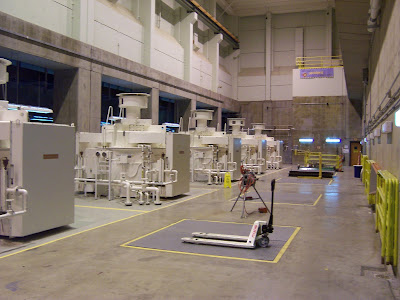 Next we went down a level and walked around the motors. Only two were in operation. 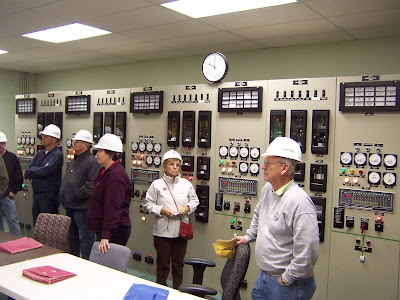 .....We got to tour the control room with its late 60's early 70's equipment. It will probably only be replaced if parts can no longer be found. 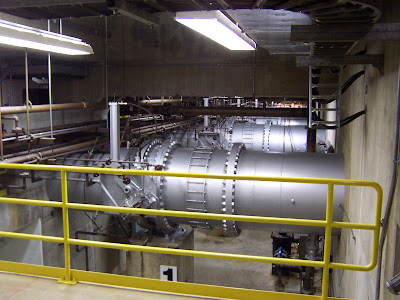 Next we went down another level (yes we are below the water about 23' or so) and saw the outlet pipes. Each are 4' in diameter and run together into the 9' outlet pipe that runs for a 1,000' or so before discharging into the canal. That is so that there can be a place where animals can cross. 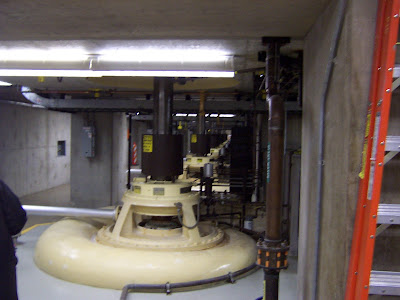 ....Down one more level and we can see the top of the pumps. You can see there are more behind it. Six in all. 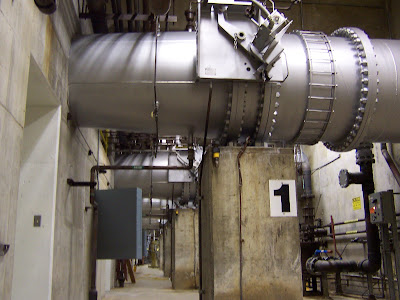 ...Also on this level, we are now below the outlet pipes. The apparatus on the side is for the operation of the butterfly valve where they can shut down the flow of water. There are hatches above so the crane can move parts in and out. The plant is shut down for three weeks in March or April when the water flow is the lowest. This is when they take everything apart and inspect it. 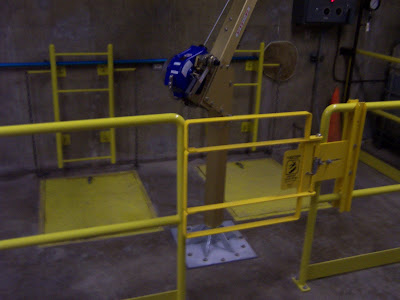 These hatches lead down yet another level where they use the net in the back to fish out items that have gotten past the first grate. 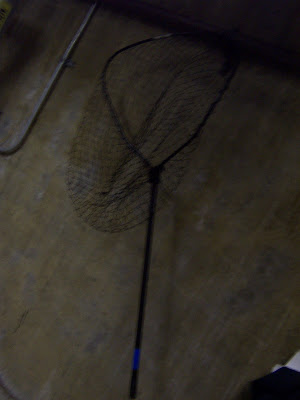 Sometimes the little net isn't big enough and they use this one. I estimate its opening to be at 3'. 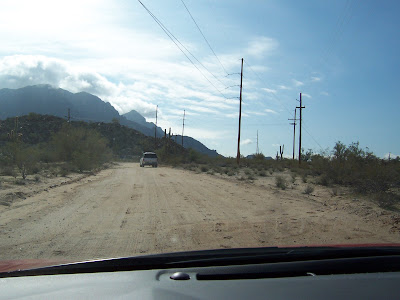 Once we go out of the plant, we followed the leader around the side to see where the water came back out into the canal. There was one place in a wash where the front of our car dug into the sand a little. No damage. 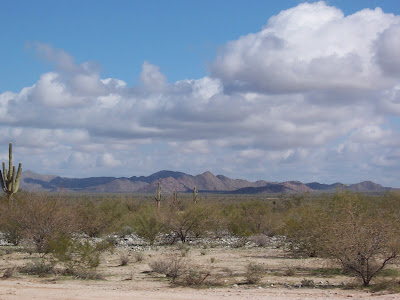 Just had to get a photo of the range to the east. 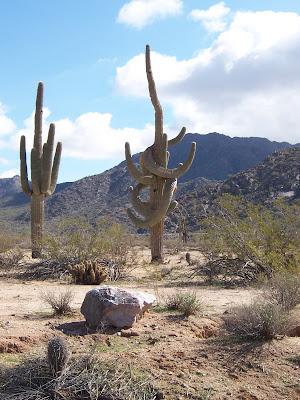 We noticed this gnarley saguaro and just had to stop and take some photos. We have some friends that have named a saguaro Gnarly and, by the way they have described its location, I think we found it. Most drooopy arms are caused when freezing temperatures cause the joints to weaken so I can't figure out why its twin wasn't affected. 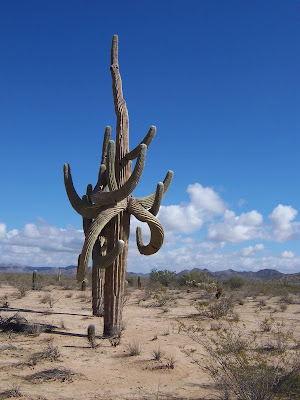 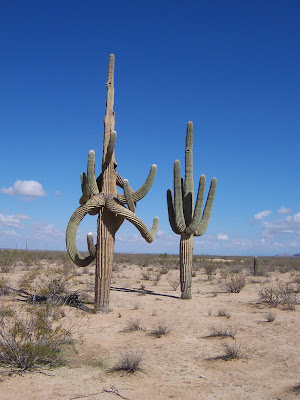 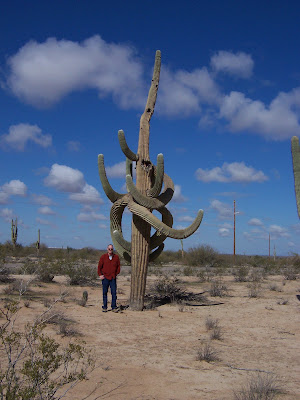 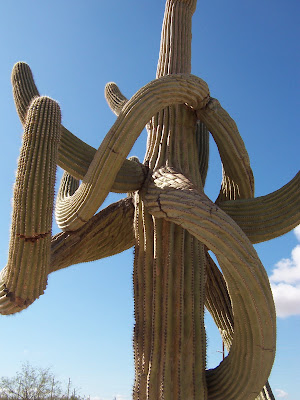 Some of the arms look like they were squeezed out of round. Flattest arms I've seen. 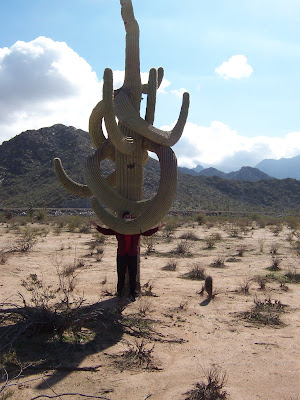 Love the cactus pictures. The tour was so interesting. Good job!